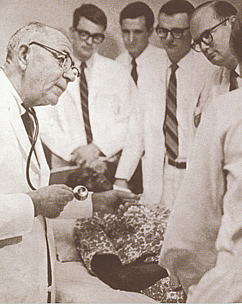 Tinsley Harrison in 1964
(UAB Archives,
University of Alabama at Birmingham)
The Doctors Harrison: A Magnificent Obsession

Two buildings and a statue at the medical school at the University of Alabama at Birmingham bear his name, but Dr. Tinsley Harrison's legacy extends beyond the structures and monuments. In his article, James Pittman tells the story of Tinsley Harrison, the seventh generation of Harrison family doctors, who helped change the way medicine is practiced in this country by changing the way medicine is taught. His forefathers had been country doctors who made house calls. Tinsley Harrison took this personal approach to the hospital where he made sure his students were looking to the patient, not to reference books, in order to make their diagnoses. But textbooks, too, were part of Harrison's pedagogy; he literally wrote the book on medicine: Harrison's Principles of Internal Medicine, the bible of medical wisdom still used today by doctors and medical students. James Pittman tells the story of Tinsley Harrison and his family of doctors and how they have perpetuated this magnificent obsession of teaching medicine, now into its ninth generation.

About the Author
James A. Pittman Jr., M.D. is Executive Dean Emeritus of The University of Alabama School  of Medicine from 1973-1992 and is now working on a biography of Tinsley R. Harrison, M.D. Pittman grew up in Orlando, Florida (when its population was less than 20,000), attended Davidson College, N.C., and Harvard Medical School, Boston, took residency training at the Massachusetts General Hospital, then did laboratory research at the NIH (Bethesda, MD), before joining Harrison in Birmingham in 1956.
Back to Top 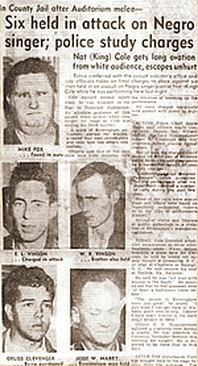 Photographs of Cole's attackers
appeared in the newspaper
after the attack
(The Birmingham News, April 11, 1956)
Interrupted Melody: The Attack on Nat "King" Cole

A highly anticipated Nat "King" Cole concert in Birmingham in 1956, which drew thousands of music fans from across Alabama, came to an abrupt and violent halt as a group of men from a pro-segregation organization charged the stage. In this article, Gary Sprayberry explains Asa "Ace" Carter's motivations for planning the attack on Cole in April 1956 by telling the history of the North Alabama Citizen's Council and Carter's campaign to rid the state of rock-and-roll music. Carter accused the music of subverting white culture and teaching "coarse negro phrases" to white teenagers. His plan to interrupt the Nat "King" Cole concert and kidnap the singer was part of that campaign, but resulted in its undoing. The cost of the ill-conceived attack to the people of Alabama proved substantial because Nat "King" Cole never again set foot in the state of his birth.

Additional Information
For additional information about the white citizens' council movement, the attack on Nat "King" Cole, and anti-rock-and-roll crusade in America, see:
The following article in the Encyclopedia of Alabama will also be of interest:
Multimedia:

About the Author
Gary G. Sprayberry is an assistant professor of history at Miles College in Birmingham. He holds a B.A.  in English and an M.A. in history from Jacksonville State University, and he has recently completed all the requirements for a Ph.D. in history at The University of  Alabama in Tuscaloosa. Sprayberry's dissertation, "Town Among the Trees: Paternalism, Class, and Civil Right sin Anniston, Alabama, 1872 to Present," examines the long struggle for civil rights in the northeast Alabama town of Anniston. The Cole attack and its surrounding circumstances form a significant part of that work. 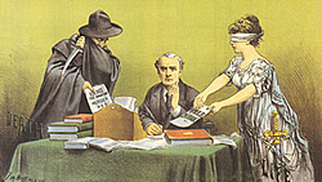 A judge decides whether to pardon or execute
Florence Maybrick
(Daniel L. Dolgin)
Jack the Ripper and a Belle From Mobile

The infamous Jack the Ripper who haunted the streets of London over one hundred years ago may seem far removed from Alabama, but, thanks to a Southern Belle from Mobile, the crimes may be closer to home than we have ever imagined. Florence Chandler married James Maybrick on a vacation to England when she was only nineteen. More intriguing than the chance that this young girl from Alabama had unknowingly married the future Jack the Ripper is the possibility that she ended his killing spree by poisoning him with arsenic—an idea she might have gotten from her own mother. Daniel Dolgin tells the tale of the beautiful young woman from Mobile who has the distinction of being the first American woman sentenced to death in England.

About the Author
Daniel Dolgin, a psychologist, has authored more than fifty journal articles, technical reports, and textbook chapterson psychology topics ranging from assessment and training to cultural issues.

In October 2000, he met with Anne Graham, author of The Last Victim in Liverpool, England. The Jack the Ripper Diary that was "found" in Liverpool in 1992 was actually in Anne's possession. Anne says that the diary had been in her family for years. In the process of researching her won family background Anne recently discovered that Florence Maybrick may have very well been her great-grandmother, but that is the basis for an entirely different story! it is certainly interesting to note that there could be an Alabama connection to the Jack the Ripper mystery.
Back to Top 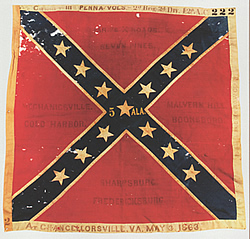 At the battle of Chancellorsville, one soldier
threw this flag into the woods to save it
from Northern troops
(Alabama Department of
Archives and History)
The Guards' Civil War

At first glance the young men from Greensboro, Alabama, who joined the Confederate army were no different than the thousands of men from all over the South who did the same thing. What makes the Greensboro Guards different is the fact that many of the men were committed diarists. They did not simply write down the usual soldier's complaints about weather and food and aching feet; instead, they used their journals to contemplate everything from why the Yankees were fighting to who was the prettiest girl. G. Ward Hubbs has compiled excerpts of these journals into a narrative, and together they tell the well-rounded and complicated story of what it was like to be a soldier in the Civil War. Using many excerpts from the diaries themselves, Hubb's article takes the reader to the battlefields, the hospitals, the prison camps, and the lonely tents of the common Civil War soldier.

About the Author
G. Ward Hubbs is now an assistant professor and archivist at Birmingham-Southern College. He was Alabama Heritage's first assistant editor. It was while at the magazine that he ran across the first diary from a Greensboro Guard. one diary led to others, and he eventually discovered a total of eight. The result, a dozen years later, is Voices from Company D: Diaries by the Greensboro Guards, Fifth Alabama Infantry Regiment, Army of Northern Virginia (University of Georgia Press, 2003). One Civil War historian has described these as "the most extensive and valuable set of documents on a single Confederate company" ever published.

Hubbs realized that these diaries were more than mere descriptions of a war, that they provided an unusual glimpse at the diarists' hometown. So while editing the diaries he started on an even larger project: tracing the company's relationship to Greensboro, Alabama. Guarding Greensboro: A Confederate Company in the Making of a Southern Community (published simultaneously by University of Georgia Press) is the first such study. Hubbs has already started on another twelve-year project. "But I'm getting out of the Civil War on this one," he vows.
Back to Top 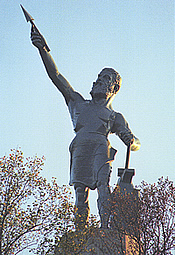 The iron man of Birmingham, the world's tallest cast iron statue, has looked over the urban landscape of Alabama's largest city for years. Vulcan stands unique in modern art, not only as the largest statue of its kind made in America, but also because no other large American city has a Roman god as its defining symbol. Vulcan has become Birmingham's best-loved monument. While some may mock this ancient and ungainly figure for his prominence in the city, the very fact of his existence is worthy of attention.

About the Author
Karelisa Hartigan is a Professor of Classics at the University of Florida, Gainesville, Florida.
Back to Top 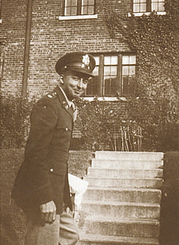 Those who knew him say "Bill" Denson was a real-life Atticus Finch--tall, handsome, soft-spoken, a man of principle, and a thorough gentleman. He taught law at West Point in 1941, exhorting young cadets to honor the constitution and human rights. But like most Americans, Bill had never seen the inside of a concentration camp. His allegiance to the principles of democracy was about to be tested when he became the chief prosecutor of "The Dachau Trials."

About the Author
Joshua M. Greene is a writer and producer/director living in Old Westbury, New York. 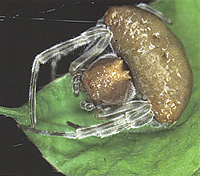 The female bolas spider was first described in 1900 by Charles E. Hutchinson. Hutchenson's meticulous description, as well as offering speculative reasons for the life-habits of the spider. In later years, Hutchinson's predictions would be proven true, making his discovery of the bolas spider doubly remarkable.

About the Author
Larry Davenport teaches biology at Samford University.
Back to Top