This vase, though of the "Old Paris" type
bears the mark of German manufacture
(Private collection)
Paris Porcelain in Antebellum Alabama

"The mantelpieces of affluent antebellum Alabama houses," writes Edward Pattillo in the Fall 2000 issue of Alabama Heritage, "were decorated in the rococo taste that reflected the Cotton Kingdom's love of the opulent." That love grew in sentimentality after the Civil War. As Pattillo points out, the post-war South saw an increase in demand for European porcelain, in part because such refinery served as a poignant reminder of a lost southern past.

In his article, Pattillo recounts the history of porcelain-from its roots in China to its rich glory days in King Louis XV's court in France and beyond. Replete with photographs and detailed descriptions of various exemplary items and services of "Paris" porcelain, the article is required reading for collectors of fine china.

About the Author
Edward Pattillo, former curator of the Judicial Department of Alabama, Montgomery, last wrote for Alabama Heritage in 1999, when he explored Alabama's mysterious early painter, Adrian Thompson. An alumnus of the University of Alabama and Columbia University, Pattillo is currently an active appraiser of personal property and a consultant for the museums and the history program of the new Federal Judicial Building in Montgomery. The author wishes to thank the owners of the porcelain discussed in this article and to give special thanks to Robert Cason, Curator, Alabama Department of History, Montgomery; and to Daniel Fate Brooks, Birmingham, biographer of William Rufus King, for their assistance with this article. The editors are grateful to Kurt Brooker and the Marengo County Historical Society for allowing Alabama Heritage to photograph the porcelain in Bluff Hall, Demopolis.
Back to Top
Suffer the Children: Child Labor Reform in Alabama

At the turn of the century, places like Merrimas Mills in Huntsville and the Alabama Canning Company in Bayou La Batre seemed to be plucked straight from the pages of a Dickens novel. Young children--some barely what we would call school-aged today--with soiled faces and ill-fitting clothes could be seen working alongside adults. Working machinery or shucking oysters for ten, twelve, and even fourteen hours a day, their movements and gazes were far too mature for their years. It was the work of a few forward-thinking reformers, writes Paul Pruitt, that changed all that, altering the shape of industry and the role of children in Alabama forever.

About the Author
Paul Pruitt is Assistant Law Librarian and Curator of Special Collections at the Bounds Law Library, University of Alabama. His previous contributions to Alabama Heritage include articles on Julia Tutwiler (AH 22 and 23) and "The Killing of Father Coyle" (AH 30). The William Stanley Hoole Special Collections Library, University of Alabama, and the Alabama Department of Archives and History each possess collections of reformist pamphlets. Among the most notable of these are Edgar Gardner Murphy's "The Case Against Child Labor: An Argument" (1902), and Herschel H. Jones and Lewis W. Hine, "Child Labor in Alabama" (1915).
Back to Top

In an age when the issue of education is often a political football and buzzwords such as "vouchers" and "accountability" are floated with impunity, it is interesting to consider that these very concerns were being debated--perhaps with even more fervor--in the early part of the century as well. Mary Lois Adshead takes an in-depth look at the life and work of the progressive educator Marietta Johnson. Johnson's School of Organic Education in Fairhope, Alabama, was on the cutting edge of pedagogical theory and practice for its day, advocating independent learning and constructive play.

About the Author
Mary Lois Adshead was raised in Fairhope and graduated from the School of Organic Education in 1958. After attending the University of Montevallo and the University of Southern Mississippi, she moved to New York for a career in journalism, public relations, and the theatre. In 1989, she returned to Fairhope, where she created a professional theatre company that operated until 1997, when she took on the job of director of the Marietta Johnson Museum.

An archive of scrapbooks, newspaper articles, books, and information files about Marietta Johnson and the School of Organic Education, the museum provided the primary resource material for this article. Particularly helpful was the volume Women of Fairhope, by Paul Gaston (University of Georgia Press, 1984). Other information in the article comes from interviews with former students and teachers at the school.
Back to Top 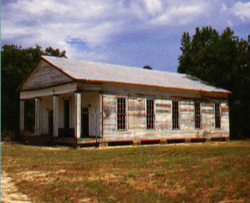 By Robert Gamble and Patrick McIntyre


In 1962, the Mobile Historic Development Commission was established--thereby becoming Alabama's first municipally related preservation agency. Nearly forty years later, the story of historic preservation in the state is compiled of both dazzling successes and sad defeats. Robert Gamble and Patrick McIntyre renew the magazine's annual "Places in Peril" feature--this time with a twist. Instead of simply enumerating the most recent additions to the list and updating the stories of properties indexed in the past, Gamble and McIntyre take the new millenium as an opportunity to look back on the past four decades of preservation in Alabama, touching on the biggest threats confronting the movement today: neglect, vandalism, sprawl, and a lack of overall public awareness.

Additional Information:
The following items in the Encyclopedia of Alabama will also be of interest:

About the Authors
Robert Gamble,  Senior Architectural Historian, and Patrick McIntyre, Endangered Properties, Alabama Historical
Commission, wrote the text for this article. Gamble is a frequent contributor to Alabama Heritage and is often called on
by AH staff for advice on historic preservation matters.

The seventh annual listing of Places in Peril 2000 (page 46) was prepared by Douglas Purcell , chair, and a committee of preservationists. Brandon Brazil, Devereaux Bemis, Charles Bullock, and Ed Hooker represented the Alabama Preservation Alliance. Representing the Alabama Historical Commission were Robert Gamble, Daphne Owens, Trina Binkley, Stacye Hathorn, and Patrick McIntyre. The committee made its selections based on nominations received from a variety of sources, including private individuals and preservation professionals.
To read about more places in peril, click here for our Places in Peril blog.
Back to Top

Recollections
Listen for the Coaling Train

Aileen Kilgore Henderson recounts her time in the Women's Army Corps Basic Training during World War II. She tells how essential the train was in her furloughs to and from Alabama. Her discussion of life as a WAC and her experience once the war had ended, depicts a vivid moment in the history of Alabama.

About the Author
Aileen Henderson is an award-winning writer of children's books and a much-valued proofreader for Alabama Heritage.
Back to Top 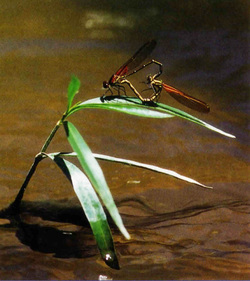 Snake doctors, devil's darning needles, horse stingers, and mosquito hawks--these colorful names reflect the folklore and superstition of dragonflies and damselflies. But the mating habits of these curious insects are no less colorful than their names, as this report by L.J. Davenport shows.