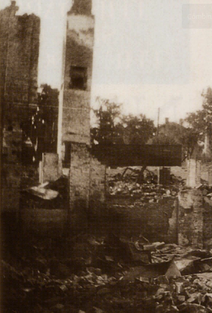 Author Charles E. Adams, a West Blocton native, relates the story of the fire that destroyed most of the town’s business district. West Blocton, less than a half-century old at the time of the fire, had grown up next to Blocton, a "company" town founded by Truman H. Aldrich, a New York native who came south after the Civil War and established the Cahaba Coal Mining Company. As a result of the area’s rapid growth, much of West Blocton had been built in boom-town haste. Although warnings about fire safety had been raised, many residents ignored the potential threat to their downtown area, and when a fire was accidentally started in a cleaning and pressing shop on the morning of July 12, 1927, it quickly grew out of control. By day’s end, the flames had destroyed forty stores, twenty homes, and several professional offices, devastating the small central Alabama town and making residents wonder if they could ever recover.

Additional Information
The following articles in the Encyclopedia of Alabama will also be of interest:
About the Author
Charles Adams attended public schools in West Blocton before entering the University of Alabama, where he earned B.S. and MA. degrees and a certificate in graduate history. After teaching in the public schools and serving in the air force in the Korean War, he became Conference Director in Continuing Education at the University of Alabama, a position he held for twenty-eight years. Author of History of the West Blocton United Methodist Church and various articles on West Blocton history, Adams currently ha a work in progress on the history of West Blocton.
Back to Top 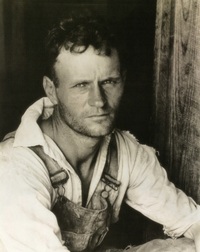 During the Great Depression, the Black Belt of Alabama served as a haunting reminder that slavery had been replaced by an equally inhumane way of life—tenant farming. Conditions in the Black Belt were documented most strikingly by photographer Walker Evans and writer James Agee in the pair's critically acclaimed book, Let Us Now Praise Famous Men. Over the past fifty years, the book, which combines Agee’s sympathetic portrayal of the sharecroppers’ day-to-day struggle against overwhelming odds and Evans’ unflinching record of the effects of poverty, has come to be seen as a classic in documentary history. In her article, Wilson details the work that Evans and Agee compiled while observing the daily lives of tenant farmers near Greensboro, Alabama, provides insight on how their work was accepted in the '30s and '40s, and also assesses the impact of the book on later generations.
Buy This Feature
Additional Information
The following articles in the Encyclopedia of Alabama will also be of interest:
Multimedia:
About the Author
Mindy Wilson is assistant acquisitions editor for the University of Alabama Press. ln August 1997 she received an M.F.A. in Creative Writing from the University of Alabama, where she edited the literary journal Black Warrior Review. She is a former news anchor at Alabama Public Radio and has been an occasional contributor to National Public Radio. A native of Monroe, Louisiana, Wilson covered education for the daily newspaper the News-Star for four years before coming to Alabama.
Back to Top 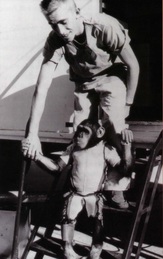 In the second of two articles on the development of the space program in Huntsville, NASA historian Mike Wright offers a behind-the-scenes look at Huntsville’s team of brilliant scientists and technicians, led by the charismatic and controversial Wernher von Braun. From the Soviet Union’s 1961 success in putting a man in orbit to the 1969 moon landing by U.S. astronauts, Wright explores the early victories and defeats of the space program, when modern cowboys with names like Armstrong and Shepard set out to explore the newest undiscovered frontier. A resident of Huntsville, Wright also discusses the concurrent growth of the town along with the industry that made it world-famous.

For more information about the history of rocketry and rocket research in Huntsville, see: For more information on Project Paperclip, see: The following articles in the Encyclopedia of Alabama will also be of interest: Multimedia:
About the Author
Mike Wright, Marshall Space Flight Center's historian since 1987, holds a B.S. in journalism and an M.S. in history from Tennessee Tech University in Cookeville, Tennessee. His experience in writing about the U.S. space program began in 1973 in the Public Affairs Office of the NASA Marshall Space Flight Center in Huntsville. He later worked for newspapers in Tennessee and Alabama and as a communications specialist for the TVA.

The story of Huntsville and the Space Program in the 1950s appears in issue 48. 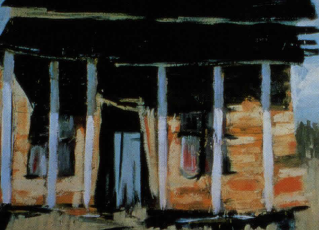 In 1960, William Christenberry--then a young art instructor at the University of Alabama--discovered a book that would change his life. That book, Let Us Now Praise Famous Men by James Agee and Walker Evans, would shape Christenberry's artistic ambitions for the rest of his life.

About the Author
Susan Sipple Elliott is the Assistant Curator of Painting, Sculpture, and Works on Paper at the Birmingham Museum of Art.
Back to Top
The Nature Journal
Shark's Tooth Creek

Shark's Tooth Creek boasts a biological treasure: the discarded teeth of prehistoric goblin sharks, buried eighty million years but now accessible to anyone with a wire screen and the patience to go fossil-hunting.

About the Author
Larry Davenport is a professor of biology at Samford University, Birmingham, Alabama.
Back to Top
Southern Architecture and Preservation
Selma Points the Way in Restoration as the St. James Hotel Reopens

Selma's 1837 St. James Hotel--the only antebellum riverfront hotel left in Alabama and one of only a handful remaining in the Southeast--has undergone a dramatic restoration. Situated near the steamboat landing, the hotel was a favorite of nineteenth-century river travels; now reopened, city leaders hope that it will attract tourists and spur other projects along historic Water Avenue.

About the Author
John Sledge, an architectural historian, is director of the Mobile Historic Development Commission.
Back to Top
The Ramble
APA and Friends Join for a Black Belt Ramble

On Saturday, May 2, Friends of Alabama Heritage and the Alabama Preservation Alliance teamed up to sponsor a ramble to historical places in the Alabama Black Belt. This special department entry recounts that day's travels.
Back to Top