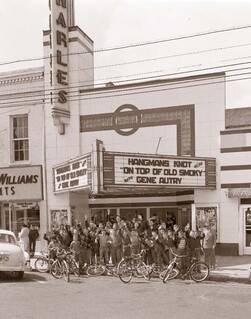 A crowd of Montgomery Examiner paperboys was treated to a double feature of Westerns at the Charles Theatre in 1953: Hangman’s Knot (1952) starring Randolph Scott, and a Gene Autry movie, On Top of Old Smoky, based on the famous folk song. (Alabama Department of Archives and History)
Montgomery's Movie Theaters in the Twilight of the B-Western
By Jim Vickrey

Though today even our telephones can stream movies, in an earlier era going to the movies was a major social event, especially for youngsters. In Montgomery in particular, for many youth, the calendar revolved around trips to one or more of the city’s movie theaters. Jim Vickrey offers a look back at the theaters of his youth—including the Strand, the Capri, the Clover, the Charles, the Pekin, and others—as well as the films that graced them and the lessons they instilled. Foremost among those lessons were the mores of the “Cowboy Code,” the ideals embodied by the likes of Gene Autry, William Boyd, Roy Rogers, and Alabama’s own Johnny Mack Brown.

About the Author
Jim Vickrey, PhD, JD, is a retired lawyer and former university president who writes from Montgomery. He enjoyed a nearly fifty year-long career in higher education, teaching courses in communication at six southern universities. Since he began going to the movies regularly in the late 1940s, he has seen more than 3,500 feature films, writing more than 2,000 movie commentaries for print and broadcast media since 1979. He has authored scores of articles in scholarly and popular periodicals and written four books, including Roy, “Rocky” & Red Ryder; “Hoppy,” Durango & Mo[o]re: Personal Recollections of What They Taught Us on Saturdays, Riding Together into the Sunset of the B-Western Movie Era, at “The Strand” & “The Bijou” and on Radio & TV (Dorrance Publishing, 2019).

To learn more about Montgomery’s Davis Theatre, see https://www.troy.edu/student-life-resources/arts-culture/davis-theatre/index.html.
Back to Top 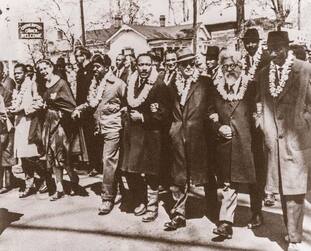 Though they may have seemed like unlikely friends from the outside, Rabbi Abraham Heschel and Dr. Martin Luther King Jr. established a close and formative friendship that helped determine the course of the civil rights movement. King (born in Atlanta in 1929) looked to Heschel (born in Warsaw in 1907) for input and wisdom at key points during the movement. Heschel, who escaped the Holocaust but lost family members during it, may have recognized something of himself when he first responded to King’s efforts in Selma. Despite their different faiths, the pair found many commonalities in their shared struggle, and they remained friends until King’s untimely death.

About the Author
Frye Gaillard, writer in residence at the University of South Alabama, is the author of such award-winning books as Cradle of Freedom: Alabama and the Movement That Changed America (University of Alabama Press, 2006); A Hard Rain: America in the 1960s (New-South Books, 2016); and Go South to Freedom (New-South Books, 2016). His most recent publication is a book for young readers, The Slave Who Went to Congress (New-South Books, 2020), co-authored with Marti Rosner. Gaillard has been the recipient of the Lillian Smith Book Award, the Clarence Cason Award, and the Alabama Governor’s Award for the Arts.

Additional Resources
Info on Rabbi Heschel: https://kinginstitute.stanford.edu/encyclopedia/heschel-abraham-joshua
Info on their friendship: https://www.plough.com/en/topics/community/leadership/two-friends-two-prophets
Back to Top 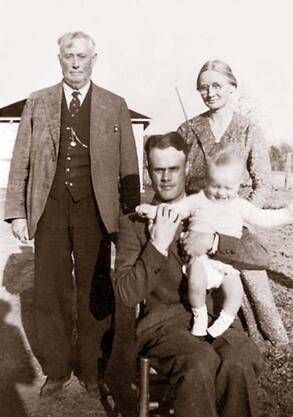 Johnson with his oldest daughter Ressie, her son Truman, and a great-grandchild. He maintained a close relationship with both of his families until the end of his life. (Claire Hamner Matturro)
James Henry Johnson's Murder, Conviction, and Pardon
“Injustice to the Living Cannot Benefit the Dead”
By Claire Hamner Matturro

After the 1904 murder of A. J. Rollinson, only one thing seemed certain: James Henry Johnson was responsible. His conviction at trial supported this idea. However, in the days that followed, many unusual circumstances surrounded his situation. Eventually, Johnson received an early release from prison to tend to his dying wife, and he was ultimately granted a pardon. Johnson returned to his life and children, and he established himself as a prominent and prosperous member of Dallas County society.

About the Author
Claire Hamner Matturro, a fifth-generation Alabamian, holds a JD and MA from the University of Alabama. A former lawyer, she taught legal research and writing at Florida State University College of Law and the University of Oregon College of Law. She is a former editor of The Trial Advocate Quarterly and author of four legal mysteries published by William Morrow. She is the great-granddaughter of James Henry Johnson. The author gratefully acknowledges the skilled help of Scotty. E. Kirkland, archivist, Reference Section, Alabama Department of Archives and History, in researching the trial and pardon. She is also grateful to several other descendants of James Henry Johnson, including but not limited to Jo-Ann Johnson Costa (author of The Bequest of Big Daddy [Koehler Books 2013] inspired by the Johnson story), Della Johnson Hamner, Milton Johnson, Paul Johnson, Loretta and Barbara Adams, and Wade Johnson for their contributions of research and photographs.
Back to Top 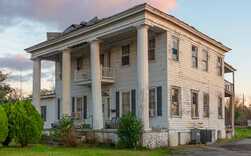 Each year, Alabama Heritage, the Alabama Historical Commission, and the Alabama Trust for Historic Preservation collaborate to promote Places in Peril, which highlights significant endangered historic properties in Alabama. Due to the fact that our Fall 2019 issue was devoted to Alabama’s bicentennial of our early statehood years, we are presenting the 2019 Places in Peril list in this issue. The list includes a number of important properties in urgent need of intervention, from a Native American trade canal to hotel, from a funeral home to an African American school and cemetery.

About the Author
Lee Anne Hewett Wofford is the Deputy State Historic Preservation Officer for the Alabama Historical Commission (AHC) and has served on the AHC staff for twenty years. She oversees the federal and state historic preservation programs for Alabama including the Alabama Register of Landmarks and Heritage, the Alabama Historic Cemetery Program, the National Register of Historic Places, the environmental review of federal projects, as well as state and federal tax credit programs. A native of Tuscaloosa, she received her BA and MA from the University of Alabama. She is the proud mother of two boys, ages fourteen and ten. 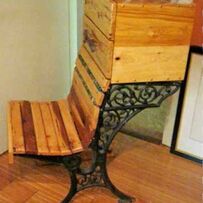 You might imagine that a NASA scientist who develops experiments for microgravity research aboard the International Space Station would just want to kick back and relax in his off time. But not Richard Grugel! Grugel spends his spare time practicing woodworking, using found or scrap objects to craft unique pieces of furniture. The Decatur artist even finds time to show his work at local festivals. As he nears retirement, Grugel may just have some extra time in his schedule—meaning that Alabamians may have even more locally made items in which to delight.

About the Author
Courtney Lowery is a senior at the University of Alabama majoring in history with a minor in anthropology. She is from Decatur, Alabama, and plans to attend graduate school in the fall. She hopes to teach history at a university.
Back to Top 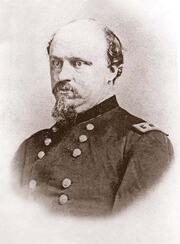 The man who led Alabama after its twentieth governor was never elected. Rather, Gen. Wager T. Swayne was appointed as a military governor during Reconstruction. A New York native and Brigadier General in the Union Army, Swayne advocated for humane treatment of African Americans, punishing whites who enacted violence against them, and outlawing chain gangs. He was also formative in bringing the Republican Party to Alabama. Though removed by Pres. Andrew Johnson less than a year into his appointment, Swayne offered Alabamians a new way forward after the Civil War. 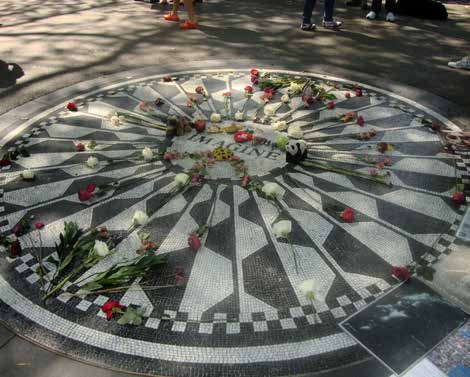 Most people likely recognize—or at least have heard of—Strawberry Fields, the area in New York City’s Central Park that memorializes musician John Lennon. But far fewer know the name of the man who created Strawberry Fields—Bruce Kelly. Kelly, an Alabama native, spent much of his youth in Georgia, where he cultivated a love for gardening and a robust set of opinions about where his mother’s plants should take root. Kelly pursued education and a career in New York City, where he pioneered the field of landscape architecture. His work on Strawberry Fields emerged from his connection to Central Park and its extensive restoration, in which he was instrumental.

About the Author
Jenny Enslen Stubbs is a communication studies graduate of the University of Alabama, has enjoyed twenty years in the publishing industry, and currently works as director of Main Street Wetumpka and copy editor of Joy to Life magazine.

To learn more about Strawberry Fields, see https://www.centralparknyc.org/attractions/strawberry-fields.
Back to Top 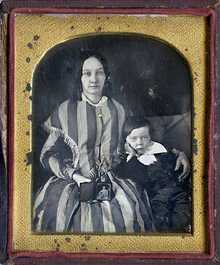 Behind the Image
A Tale of a Traveling Man
By Frances Osborn Robb
​
Sometimes one form of technology can assist in unearthing details about another. Though daguerreotypes may not seem like technology in the twenty-first century, in their own era they offered remarkable advances and are still the object of careful study by photographic historians. They can also reveal important details about the art and culture of their creation. For that reason, when a British historian had a daguerreotype with Alabama connections, he quickly reached out to historians in the American South for information. From that correspondence came this tale of a traveling daguerreotype maker and his time in Alabama.

The “From the Archives” columns during 2020, the centennial of women’s suffrage, will focus on the important roles of women in Alabama history. In this installment, archivist Scotty Kirkland explores the importance of Julia Tutwiler and the memorial Tutwiler's student, Geneva Mercer, created in her honor. That memorial, a marble sculpture created by Mercer, an accomplished artist, now graces the Alabama Department of Archives and History, a lasting tribute to the woman who shaped life for so many generations of Alabamians.

About the Author
Scotty E. Kirkland is exhibits, publications, and programs coordinator at the Alabama Department of Archives and History. 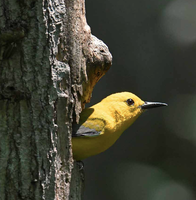 Avid birders are prone to curious escapades. After all, they are often up before dawn, traipsing through the wilderness in search of that special, elusive species. So when Alabama Heritage’s resident naturalist heard about prothonotary warblers lurking in Alabama’s Ebenezer Swamp, he well, naturally headed off in hot pursuit of the black-and-yellow beauties.

About the Author
Larry Davenport is Paul N. Propst Professor of Natural Sciences at Samford University, Birmingham, and is co-author (with Ken Wills) of Exploring Wild Alabama (University of Alabama Press, 2016).

To learn more about prothonotary warblers, see https://www.allaboutbirds.org/guide/Prothonotary_Warbler/id.
Back to Top
Reading the Southern Past
El Golfo de México (Or the Fishy Sea)
By Stephen Goldfarb

This quarter’s installment of “Reading the Southern Past” explores two different texts focused on Alabama’s oceanfront. Taken together, The Gulf of Mexico: A Maritime History (University of South Carolina Press, 2019), by John Sledge, and The Gulf: The Making of an American Sea (Liveright, 2017), by Jack Davis, offer a well-rounded picture of the Gulf of Mexico. While Sledge tracks the area’s political history, Davis explores the natural environment of the area.