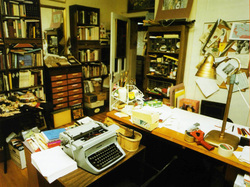 Once, when he was asked to disclose his favorite hors d' oeuvres, Mobile's multifarious son, Eugene Walter, responded in typical mischievous fashion, "Bayou La Batre oysters while someone's rubbing my feet." But Walter was more than an epicure; he was an accomplished gardener, artist, chef, and writer, having published several novels, book of poetry, and cookbooks. Indeed, he was considered by many Mobilians to be the port city's one-and-only Renaissance man. In the Summer 2000 issue of Alabama Heritage, Mindy Wilson charts Walter's life from his 1920s childhood in the heart of Mobile's old-world-style downtown, to his adventures abroad, and finally to his return, late in life, to the city that never left his heart or his imagination.

About the Author
Mindy Wilson is assistant acquisitions editor at The University of Alabama Press. She has an MFA in Creative Writing from The University of Alabama and has published fiction in New Orleans Review. She is currently at work on a public television documentary on the Talladega Superspeedway and a novel. For the article on Eugene Walter, Wilson spent almost a year researching Walter's life. During that time she made several trips to Mobile, interviewing at least two dozen of his friends and associates, researching in local archives and attending some of the dedications and parties in Walter's honor. She thanks the many Mobilians who received her graciously and spoke candidly about their good friend.
Back to Top
Alabama Collections: Cloisonné at Anniston's Berman Museum

Representing a colorful, mythic world of dragons and masks, the cloisonné of China is one of the least understood and least studied forms of Chinese decorative art. In Anniston, the Berman Museum is doing its share to rectify that problem. Karen Henricks, an art history professor at Jacksonville State, details the Berman collection of this brilliant, colorful porcelain, describing the intricate process of cloisonné production, its storied and sometimes mysterious history, and its significance as a cultural artifact.

Additional Information:
The following article in the Encyclopedia of Alabama will also be of interest:

About the Author
Karen I. Henricks who holds an M.A. and Ph.D. from the University of Missouri, has been teaching art history at Jacksonville State University in Jacksonville, Alabama, since 1987. A consultant and guest curator with the Berman Museum for the past year, Henricks has actively involved students and others in the research and exhibition of the Berman's diverse holdings.

The author wishes to thank the museum complex marketing director, Susan Robertson, for her assistance with this article. Curator Robert Lindley also assisted the editors in helping produce the article. The Berman Museum is open from 10 A.M. to 5 P.M. Tuesday through Saturday, and Sunday from 1 to 5 P.M., and is open on Mondays from Memorial Day to Labor Day. The permanent collections remain on view throughout the museum, with cloisonné, ivory, and other decorative objects from the Far East currently on display in the special exhibits gallery. For additional information on the museum visit on-line or contact the museum directly at (256) 237-6261.
Back to Top 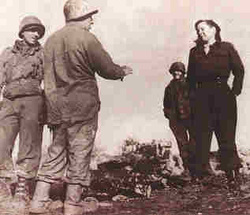 Private Martin L. Herr and Harriett Englehardt
(Alabama Department of Archives and History)
Harriett Engelhardt: A Job Worth Having

At 5'1", 110 pounds, Harriett Engelhardt did not, at first glance, appear to be a prime candidate for service at the front in one of the most catastrophic conflicts of the twentieth century--but she was. A closer examination of her brief life shows she would not have been anywhere else. Karon Bailey documents the extraordinary experiences of this Montgomery native, focusing largely on Engelhardt's fateful time as a "Clubmobile Girl" in the Red Cross in Europe during World War II, where she would meet her untimely end. Quoting extensively from Engelhardt's eighty-six letters home to relatives and friends during this period, Bailey paints a vivid picture of the breadth of spirit behind this diminutive woman.

About the Author
Karon Bailey, an associate professor of English at Alabama State University, holds an M.A. in English from Florida State University and an Ed.D. in English Education from Auburn University. Interested in employing women's nontraditional writings such as letters, diaries, and journals-in the classroom, Bailey used the letters of Harriett Engelhardt as the basis for her doctoral dissertation. 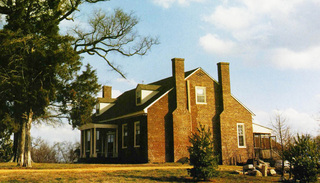 The William Koger House - Its Architecture
By Robert Gamble

In 1991, not even the collapse of an entire endwall just days before she was to close on her purchase of the historic William Koger house outside of Florence could dampen Nancy O'Neal's spirits. O'Neal had recently moved back to north Alabama--an area her family has been in since well before the Civil War. After spending most of her adult life as the art director for a major New York advertising firm, everything was a challenge and an adventure--from acquiring a cattle operation with almost no relevant experience to buying a dilapidated house in the middle of a wide expanse of cotton fields. Milly Wright tells the story of O'Neal's restoration of the c.1830 plantation house, along with her return to the roots her family set down in 1819. Robert Gamble, Senior Architectural Historian for the Alabama Historical Commission, tells the story behind the Koger's "story-and-a-half double-pile" architecture.

About the Authors
According to Milly Wright, she fell under the spell of past lives in 1986 while wading through a cotton field behind the Koger house looking for the family cemetery with Alabama Historical Commission staff. Since then she has been active in discovering, describing, and helping preserve buildings, sites, and stories important to north Alabamians. President of Heritage Preservation, Inc. during the time the Koger house was donated to that organization by Elizabeth Dabney Gerber, Wright is currently on the boards of Friends of the Alabama Archives, the Tennessee Valley Historical Society, the Maud Lindsay Free Kindergarten, and the Edith Newman Culver Museum at Waterloo, Alabama. A former physics, math, and English teacher at Huntsville High School, Wright has also been involved with her family's Oriental rug business for the past twenty-five years.

Karl-Heinz Bösche, prisoner #4 WG 33980, was incarcerated in Camp Opelika, Alabama, from 1943 to 1944. Fifty years later, he returned to the campsite where he had spent much of World War II.

About the Author
Albert F. Killian, a former Auburn University administrator, is a retired lieutenant colonel in the Alabama National Guard, where he served three tours of active duty during his forty-two-year military career. Killian serves onthe board of hte Museum of East Alabama.
Back to Top 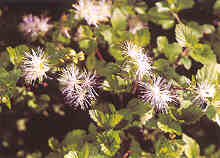 In 1857, two friends from Tuscaloosa discovered a sprawling shrub, part of a previously unknown genus of plants whose closest relative was in Japan.  The drama surrounding the naming of the plant was as remarkable as its discovery, and forms the basis for L.J. Davenport's report on the shrub.

Additional Information
The following article in the Encyclopedia of Alabama will also be of interest:
About the Author
Larry Davenport is the much-revered botanist at Samford University, Birmingham, Alabama.
Back to Top