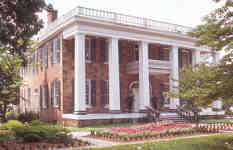 A home surrounded by an intricately designed and well-kept garden is a rare pleasure today, and was even more so in the nineteenth century. And that’s what makes the rediscovery and restoration of the Battle-Friedman garden such a revelation. Built in the late 1830s by Alfred Battle, the Battle-Friedman house in Tuscaloosa has remained as one of the finest examples of antebellum architecture in Alabama, but not until 1987, when an elaborate garden design was uncovered on the grounds, was the home’s grandeur fully realized. In the Winter 2000 issue of Alabama Heritage, author George R. Stritikus tells the story of the Battle-Friedman garden, the oldest documented garden in Alabama, and a garden with roots running all the way to the rich landscaping tradition of England.

About the Author
George R. Stritikus, Jefferson County Alabama Cooperative Extension System Agent, is a landscape consultant and advisor for several state, municipal, and private groups in Alabama. An expert in the gardening history of Alabama and the South east, he teaches in the Master Gardener's Program in north Alabama and speaks to an average of sixty groups per year on various garden-related topics. Stritikus also answers horticulture questions statewide over 1-800-644-4458.

Back to Top
When Stars Fell on Alabama

On the night of November 12, 1833, gamblers, thieves and other assorted sinners along the east coast of the United States traded in the instruments of their debauchery in exchange for prayerbooks, so sure were they that the end was near. The stars were falling from the sky; certainly, they believed, the earthly world was doomed. Alas, the world was not coming to a close. The dramatic display was actually a meteor storm—one of the most intense in recorded history—and, as John Hall writes in the Winter 2000 issue of Alabama Heritage, "its memory seemed to stick with Alabamians long after it was forgotten elsewhere."

Additional Information:
Sky and Telescope
The following article in the Encyclopedia of Alabama will also be of interest:
About the Author
John Hall, retired from the Alabama Museum of Natural History, where he was the head naturalist for many years, is now Executive Director of the Alabama Museums Association. He wishes to thank astronomer Gene Byrd and historian Guy Hubbs for leading him through the wilderness of science and archives as he prepared this article. A frequent contributor to Alabama Heritage, Hall has written on Hernando de Soto, the Sylacauga meteorite that struck Mrs. Ann Hodges in 1954, and the Wetumpka Astrobleme. His next article for Alabama Heritage will deal with the visit of pioneer botanist William Bartram to the southeast in 1775.
Back to Top 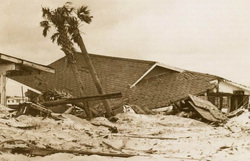 Some twenty years ago, in September 1979, Hurricane Frederic ripped through the Gulf Coast, tearing the roofs off buildings, slinging freighters ashore, and wreaking havoc on the lives of half a million Alabamians. Mack Lofton details the life of the devastating tempest in the Winter 2000 issue of Alabama Heritage, charting the storm’s course from its infancy off the coast of Africa all the way to its last gust off the coast of Maine. Along the way, Lofton presents eyewitness accounts of the Mobile area’s preparations for the storm, the damage it caused, and the monumental clean-up and restoration effort that followed it.

Additional Information
As reference materials, the Army Corps of Engineers' document, Hurricane Frederic: Port disaster report, 30 August- 14 September 1979, compiled and written by Douglas W. Parker, Evelyn H. Brown, and Jack C. Mallory, proved to be indispensable in charting the course of the storm and in verifying storm-related statistics. Also consulted were back issues of the Mobile Register and the Birmingham News.

Multimedia:
About the Author
After a long business career, J. Mack Lofton began writing full-time about fifteen years ago. He has published two books with the University of Alabama Press. His first, Voices from Alabama (1993), includes interviews with over 120 of the state's best storytellers, among them people from all walks of life-former sharecroppers, industrial workers, fishermen, housewives, preachers, and civil rights workers. This volume was followed by Healing Hands: Art Alabama Medical Mosaic (1995), a book of remembrances of physicians and nurses across the state. A third book, In the Name of the Law, has been completed detailing the personal experiences of Alabama law enforcement officers. Following the same technique he used for his books, Lofton began collecting personal stories about Hurricane Frederic at the Florida-Alabama line and worked his way west, talking to scores of survivors, all of whom had vivid memories of the storm.
Back to Top 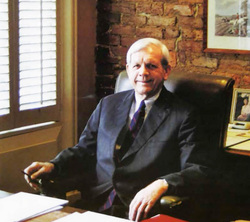 A significant effort is underway around the nation and in Alabama to preserve and re-use historic commercial buildings. Often these restoration projects are so successful—both aesthetically and financially—that they encourage other preservation efforts around them and bring life back to downtown. Such is the case in four Alabama cities chronicled by Mary Johnson Huff in the Winter 2000 issue of Alabama Heritage. Montgomery, Birmingham, Florence, and Anniston have all seen dramatic transformations of neglected commercial properties in recent years.

About the Author
Mary Huff holds a master's degree in clothing and textiles from the School of Human Environmental Sciences at the University of Alabama. She has written numerous books on quilts, including Star Quilts (New York: Crown, 1992), which she adapted for an Alabama Heritage article appearing in Fall 1993. Huff's interest in material culture led her into historic preservation and an eight-year stint on the board of the Alabama Preservation Alliance (APA). It was during her editorship of the APA newsletter that she began to write about historic preservation, and she has subsequently completed more extensive preservation-related writing projects for the Alabama Historical Commission. Huff currently has commitments with national publishers for two books on quilts and heads her own publishing service in Montgomery.
Back to Top

Roy L. Mott recounts his childhood in the Great Depression, watching his parents to struggle to make ends meet. The times were hard, but the Mott family was brought closer together than ever, creating fond memories even in the midst of the difficulties of the period.

About the Author
Roy L. Mott, Sr., retired after many years as an electronics instructor at Hobson State Technical College, lives in Thomasville, Alabama.
Back to Top 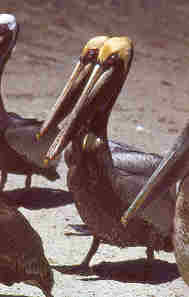 Pelicans inhabit the edges of oceans and lakes, with seven species worldwide. One species, the brown pelican, occupies the Atlantic, Gulf, and California coasts of the United States, extending its range south into the tropics. The history of this species--and particularly its brush with extinction--is the subject of this month's "Nature Journal."

About the Author
L.J. Davenport is a professor of biology at Samford University, Birmingham, Alabama.
Back to Top