The Birmingham Museum of Art: A Civilizing Spirit


How does a rough-and-tumble mercantile town polish off its edges and get a little refinement? If you're Birmingham, Alabama in the late nineteenth and early twentieth centuries, you cultivate a nascent appreciation of the arts and open yourself a museum, with the help of what one writer erroneously termed a "group of little old ladies." In the Spring 2001 issue of Alabama Heritage, Vicki Ingham tells the story of the formation of the Birmingham Art Club (later the Birmingham Art Association), which consisted largely of a group of energetic and highly cultured Birmingham women, all of them former art students themselves, who ushered in an appreciation for the fine and decorative arts in the so-called Magic City. Later, these very same women were the catalysts for the development and construction of a new museum. Now, celebrating its fiftieth anniversary, the Birmingham Museum of Art enjoys a reputation as one of the finest regional museums in the country.

About the Author
Vicki Ingham, a book editor at Meredith Corporation in Des Moines, Iowa, earned her master's degree in art history through a joint program with the University of Alabama and the University of Alabama at Birmingham. Her thesis, "Women, Art, and the New South: From the Birmingham Art Club to the Birmingham Museum of Art," provided the basis for this article. Ingham's research made extensive use of materials in the Birmingham Public Library Department of Archives and Manuscripts, the vertical files in the Tutwiler Collection of Southern History and Literature, and the personal papers of William and Rosalie Pettus Price.
Back to Top 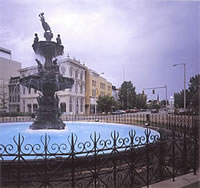 What makes a strip mall different from a farmer's market? Why is the dining experience at a fast food restaurant so different from that at a tucked-away neighborhood bistro? Alice Bowsher knows, and she wrote a book about it. Alabama Heritage's Spring 2001 edition excerpts from Bowsher's new book, Alabama Architecture: Looking at Building and Place, in which she delves into the notion of "place" and how it shapes our experiences of our surroundings. Published by the University of Alabama Press in cooperation with the Alabama Architectural Foundation, Alabama Architecture features one hundred Alabama sites, both grand and modest, from all regions of the state, dating from the antebellum period to the present day.

About the Author
Birmingham native Alice Bowsher is an architectural historian and preservationist whose books include Design Review in Historic Districts, House Detective, and Town Within a City. She serves as Alabama advisor to the National Trust for Historic Preservation. Lewis Kennedy is a commercial photographer specializing in images of the built environment. He also has an interest in preservation. His renovated ca. 1920 storefront on Second Avenue North in Birmingham helped reverse the neighborhood blight and strengthen the Birmingham City Center.

Published by the University of Alabama Press in cooperation with the Alabama Architectural Foundation, Alabama Architecture features one hundred Alabama sites, both grand and modest, from all regions of the state, dating from the antebellum period to the present day. In selecting the sites, the Alabama Architectural Foundation invited nominations from chapters of the American Institute of Architects (AlA), members of the Alabama Council of AlA, as well as other designers, art and architectural historians, and historic preservationists. The result is an exhilarating, educational, and aesthetic tour of the state. For more information, contact the University of Alabama Press: (205) 348-5180
Back to Top 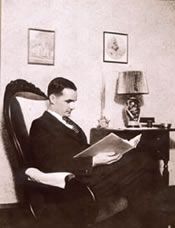 Clarence Cason was described in the Montgomery Advertiser as one of the "most brilliant and engaging thinkers in Alabama." Returning to the University of Alabama as a journalism professor in 1928, only eleven years after his graduation, Cason had already distinguished himself as a highly respected reporter and essayist, widely publishing his works in leading national journals. As a writer, Cason often concerned himself with his Alabama home, questioning the South's stubborn traditionalism while trying to defend its distinctiveness. Cason culminated these thoughts in 1935, in a book of essays titled 90° in the Shade. But in this book that should have been his crowning achievement, Cason found his deepest fears, notes Bailey Thomson in the Spring 2001 issue of Alabama Heritage.

Additional InformationThe following items in the Encyclopedia of Alabama will also be of interest:
About the Author
Bailey Thomson, an associate professor of journalism at the University of Alabama and a former associate editor
of the Mobile Register, has written previously for Alabama Heritage, most recently on his distant ancestor, Confederate Brig. Gen. John C. C. Sanders. This article is adapted from an introduction Thomson wrote for a new edition of Clarence Cason's book, 90° in the Shade, forthcoming from the University of Alabama Press.

Each spring, the University of Alabama journalism department honors its founder by presenting the Clarence Cason Writing Award to an outstanding non-fiction author. Past winners include Gay Talese, Edward O. Wilson, and Howell Raines. This year's winner is Albert Murray.
Back to Top
Clarabelle: The Montgomery Advertiser's "Felonious Feline"

Even Grover Cleveland Hall, the Pulitzer Prize-winning editor of the Montgomery Advertiser from 1926-1941, didn't know the scroungy piebald cat that appeared at the Advertiser's offices in January 1938 would soon become the most talked-about female in Montgomery. Named Clarabelle, this "felonious feline" captivated the newspaper staff and the public as well. From the moment she sashayed onto the Advertiser's editorial page she "ran away with the show," as Hall himself admitted. Aileen Kilgore Henderson traces the history of Clarabelle at the Montgomery Advertiser, from her arrival in the offices to her death in 1940.

Additional Information
The following article in the Encyclopedia of Alabama will also be of interest:
About the Author
Aileen Kilgore Henderson grew up in Alabama and currently resides in Brookwood. Her previous contribution to Alabama Heritage was "Listen for the Coaling Train ," a remembrance of her time as a member of the Women's Army Corps during World War II. The piece appeared under the "Recollections" feature in AH 58. After serving in the Women's Army Corps during World War II as an airplane engine mechanic and a photo lab technician, Henderson earned bachelor of science and master of arts degrees from the University of Alabama. She has taught school in Northport, Alabama; Big Bend National Park, Texas; and Stillwater, Minnesota. She has also written three juvenile novels, all published by Milkweed Editions of Minneapolis, and a World War II diary, Stateside Soldier, published by the University of South Carolina Press in March 2001. In addition, Mrs. Henderson sits on the Board of Directors of the Alabama Writers' Forum, is a member of the Society of Children's Book Writers and Illustrators, and serves as a much-valued proofreader for Alabama Heritage. The author is especially grateful to the Alabama Department of Archives and History for their help in researching the story of Clarabelle.
Back to Top

Spanish moss is beset by misinformation: it is not Spanish, nor is it a moss, nor is it a parasite. L.J. Davenport examines the history of this misunderstood and misnamed plant.


​
Additional Information
The following items in the Encyclopedia of Alabama will also be of interest:
About the Author
Larry Davenport is a professor of biology at Samford University, Birmingham.
Back to Top