“Finding” Clotilda: Now What Happens?
By Stacye Hathorn and James P. Delgado
​
Though the importation of enslaved persons had been outlawed in 1807, Capts. Timothy Meaher and William Foster decided to flout the law by importing enslaved persons on the Clotilda in 1860. Many who entered Mobile on the ship settled in an area they called Africatown, where some of their descendants remain today. The ship’s whereabouts remained unconfirmed for well over a century, though some locals believed they know where it had been abandoned. When an unauthorized exploration claimed to have located the remains of Clotilda, experts from the Alabama Historical Commission (AHC) stepped in to determine the truth. The AHC worked with strategic partners, including the Alabama Department of Conservation and Natural Resources (DCNR), the National Park Service (NPS), the Smithsonian National Museum of African American History and Culture (NMAAHC), the Slave Wrecks Project (SWP), and SEARCH, Inc., a private cultural resource management firm. Thanks to their expertise and effort, the team verified the actual remains of Clotilda, shedding light on a long-shrouded mystery.

About the Author
Stacye Hathorn is the Alabama State Archaeologist with the Alabama Historical Commission and the project manager
for the Clotilda investigations. Hathorn is an archaeologist and sociolinguist with over two decades of experience in field archaeology, preservation, and public archaeology with practice in archaeology of the southeastern United States and early Christian Ireland. Hathorn’s research interests include cultural persistence in terms of both material culture and language. A native of Southside, Alabama, and daughter of a millwright and homemaker, Hathorn now lives in Tallassee, Alabama, and is mother to two daughters.

James P. Delgado is the Senior Vice President of SEARCH, Inc. and has led SEARCH’s work on Clotilda since the beginning of the project. A maritime archeologist who has worked around the world on over a hundred maritime archaeological projects and wrecks, his specialty is nineteenth-century ships and shipping. He is the author of over thirty books and is the lead author (with Deborah Marx, Kyle Lent, Joseph Grinnan, and Alex De Caro) of the soon-to-be published Clotilda: A Mid-Nineteenth Century Schooner Wreck in the Mobile River (University of Alabama Press).
​
Additional Information
Back to Top 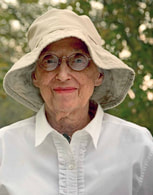 Perry County native Mary Ward Thomas Brown arrived late to her writing career, but once there, she gained substantial acclaim. Brown published her first short story at age thirty-eight, and success came slowly, but it did arrive. The publication of her collections, Tongues of Flame and It Wasn’t All Dancing, was gratifying, but her most proud achievement was the inclusion of one of her stories in The Human Experience, an anthology of prominent Russian and American writers. Brown’s close friend, Wayne Flynt, chronicles her life and legacy in this tribute to one of Alabama’s own literary geniuses.

About the Author
​Wayne Flint has lived in and shared his lover’s quarrel with Alabama for most of his 81 years. He has lived in Sheffield, Gadsden, Anniston, Birmingham, Dothan, and Auburn, and taught at Samford University for 12 years and Auburn University for 28. He also was Eudora WeltyVisiting Scholar at Millsap College. His 6,000 students included 68 MA and PhD graduates. He served as president of the Alabama and Southern Historical associations, received numerous awards for his 15 books, and was elected to the Alabama Academy of Honor. His most cherished awards were the Hugo Black Award (University of Alabama), the C. Vann Woodward/John Hope Franklin Award from the Fellowship of Southern Writers, and the Governor’s Award for the Arts. He was visiting professor in Hong Kong and lectured abroad in the United Kingdom, Austria, Netherlands, the Czech Republic, and the People’s Republic of China.

Lowe Mill Arts and Entertainment: The Many Lives of a Huntsville Landmark
By Stephanie L. Robertson

Today, Huntsville’s Lowe Mill is a vibrant arts center, but the structure has an extensive history dating back to the state’s mid-nineteenth-century textile industry. The mill incorporated at the turn of the century, just one of Huntsville’s many textile mills. The structure changed hands many times over the decades, but it became a mainstay of the community, offering its employees and their families cultural opportunities such as a village with schools, a YMCA, stores, and other businesses. After changes in the industry rendered the factory obsolete, the mill’s structure was revitalized by the introduction of artists into the space. Today, the organization has become the “largest privately owned arts facility in the South,” complete with artists and artisans who create new kinds of artwork in a classic space.

About the Author
Stephanie L. Robertson grew up behind her parents’ general merchandise store, Jachin Grocery, in Jachin, Alabama. She graduated in human environmental science at the University of Alabama in the 1990s and moved to North Alabama, where she now lives with her husband, Jim, and their daughter, Elizabeth. Robertson produces social media content for Central Valley Church of Christ and has been published in local newspapers and magazines. She writes about southern life at www.sweetgumlife.com and plans to self-publish her dystopian novel in fall 2022. Her self-published novella, The Black Box, is available on Amazon. 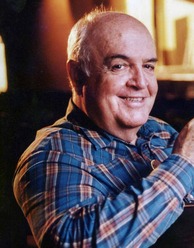 Remembering Jimmy Hatcher: A Showman of the South
By Tim L. Pennycuff
Known to admirers as Alabama’s “Mister Theater,” Enterprise native Jimmy Hatcher made an indelible mark on Birmingham and the state. He began his performing career as a student at Birmingham Southern College, and he moved on to become a full-time theater instructor, spending decades as a theater professor at the University of Alabama at Birmingham. Throughout, he nurtured and trained generations of thespians, working with everyone from Fannie Flag to Leonard Nimoy.

About the Author
Tim L. Pennycuff is the University Archivist at the University of Alabama at Birmingham and holds a faculty appointment in the UAB Libraries as an associate professor. His most recent publication, Fifty Years of Dreams and Discoveries: The University of Alabama at Birmingham (2019), is a coffee-table photo book co-authored with Charles Buchanan and created by a host of UAB staff to celebrate the fiftieth anniversary of UAB. While he never knew the subject of this article, for his entire two-decade-long career at UAB, Pennycuff has lived with Jimmy Hatcher—more accurately with Hatcher’s archival legacy in the various collections of the UAB Archives, including the Hatcher and Lily May Caldwell manuscript collections and the archival records of Town and Gown Theatre. Pennycuff would like to thank Jennifer Beck, archival associate at UAB, for her assistance. 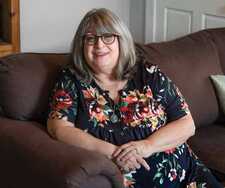 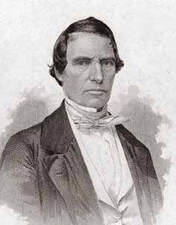 Portraits and Landscapes
The Emancipation of John Bell
By Carlie Anne Burkett
After being purchased and enslaved by Alabama politician William Rufus King, John Bell was relocated to Alabama, where he spent many years at Chestnut Hill, King’s plantation, as well as time in France when King was appointed as a minister to that country. Upon King’s death, Bell experienced a complicated path to emancipation, one circumscribed by the state’s laws and the whims of King’s surviving relatives.

About the Author
Carlie Anne Burkett is a reference archivist at the Alabama Department of Archives and History who holds an MA in library and information science from the University of Southern Mississippi. 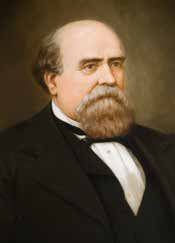 Alabama Governors
George S. Houston
By Colin Rafferty
As a two-term governor, George Houston led Alabama into more than a century of Democratic leadership. Among his decisions, those with the longest ramifications were overseeing the creation of a new state constitution (a document still used today) and his decision to enact convict leasing (a practice Alabama maintained longer than any other state).

About the Author
Colin Rafferty teaches at the University of Mary Washington and is the author of Execute the Office: Essays with Presidents (Baobab, 2021) and Hallow This Ground (Indiana University Press, 2016). 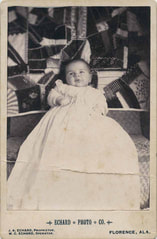 Behind the Image
A Crazy Quilt
By Frances Osborn Robb
A photograph from a Florence, Alabama, photographer reveals insights into the influence of Japanese culture on nineteenth-century America, thanks to the exhibits at the 1876 Centennial Exposition. Held in Philadelphia, the exposition introduced Americans to the ceramic designs that led to “fancy work” and the creation of so-called crazy quilts.

About the Author
Frances Osborn Robb is the contributing editor for the “Behind the Image” department of Alabama Heritage. She is the author of Shot in Alabama: A History of Photography, 1839–1941, and a List of Photographers (University of Alabama Press, 2017).

From the Archives
Threads of Evidence: Investigating the Origins of a Confederate Flag Remnant
By Georgia Ann Hudson and Ryan Blocker
Archivists at the Alabama Department of Archives and History use contemporary tools to uncover more information about a fragment of fabric that it received in 1950. Purported to be a sliver of the first flag of the Confederacy, this fragment’s complete provenance remains unclear, but thanks to collaboration from archival institutions, we now have more information about its origins than ever before.
​

Nature Journal
Bluebirds (And Happiness)
By L.J. Davenport
Thanks to the introduction of the invasive European Starling, Eastern Bluebirds have been threatened by loss of habitat. To combat this, John Findlay began constructing bluebird boxes, offering homes perfectly designed for the species. Today, the John Finlay III Bluebird Trail at Birmingham’s Oak Mountain inspires many, including Alabama Heritage’s resident naturalist, who decided to build some bluebird boxes of his own.

Reading the Southern Past
“A Republic of Equal Citizens”
By Stephen Goldfarb
This quarter’s installment of “Reading the Southern Past” explores the legacy of the Civil War and civil rights, taking as its topic Eric Foner’s The Second Founding: How the Civil War and Reconstruction Remade the Constitution (W. W. Norton, 2019), Michael Vorenberg’s Final Freedom: The Civil War, the Abolition of Slavery, and the Thirteenth Amendment (Cambridge University Press, 2001), and James Oakes’s The Crooked Path to Abolition: Abraham Lincoln and the Antislavery Constitution (W. W. Norton, 2021).


About the Author
Stephen Goldfarb holds a PhD in the history of science and technology. He retired from a public library in 2003.