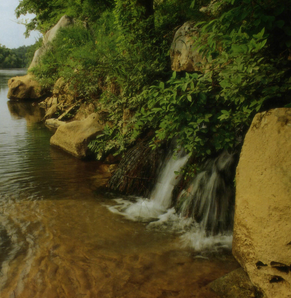 Limestone bluffs on the Cahaba in Bibb County. The rare Alabama croton thrives at the top of the rocky banks.
Alabama's Heart River: The Cahaba

Todd Keith presents a comprehensive view of the history, geology, ecology, and current state of the Cahaba River, one of the most biologically diverse rivers in the United States. Along the winding course of the Cahaba are the relics of a Native American civilization, the ruins of Alabama's first capital, Cahawba, and abandoned coal mines and coal communities. In addition to historic sites, the Cahaba in Bibb County supports a "lost glade," a biological island of rare and endangered plants, and every spring, near West Blocton, an unusual display of Cahaba lilies brings hundreds of visitors to see the brilliant white blooms. Although pollution has been and continues to be a threat to the river's health, the formation of the Cahaba River Society, dedicated to protecting the river, and an increasing awareness among the public of the wide variety of aquatic life on the Cahaba provide hope for its future. The article features numerous photographs by acclaimed photographer Beth Maynor Young.

The following articles in the Encyclopedia of Alabama will also be of interest:Multimedia:
About the Author
Todd Keith, a freelance writer living in Des Moines, Iowa, holds a B.A in English from Auburn University and an M.A.  in English from Appalachian State University. He has taught English in Slovakia and written for a variety of publications in Alabama. The author of The Cahaba: A Gift for Generations, Keith is currently working on a publication about Alabama rivers.
Back to Top
Places in Peril, 1998

By Ed Hooker and Brandon Brazil

For the fifth year in a row, The Alabama Historical Commission, a state agency, and the Alabama Preservation Alliance, a non-profit group, have drawn up a list of the most endangered historic sites in Alabama. As part of the effort to raise awareness of endangered properties around the state, the Places in Peril listing is published each year in the fall issue of Alabama Heritage magazine. The 1998 endangered properties list includes: Bullock County Road 14, Bullock County; Sand Island Light, Mobile Bay; Downtown Pine Apple, Wilcox County; Western of Alabama Car and Engine Shops, Downtown Montgomery; Pleasant Hill Presbyterian Church, Dallas County; Quinlan Castle, Birmingham; Historically Black Colleges Statewide; Atassi, Macon County; The Cash House, Chilton County; and the Queen City Pool Complex, Tuscaloosa. An update of the last four years of endangered properties appears with the article.

The bulk of the information about properties was gathered from the files of the Alabama Historical Commission, but individual nominations from around the state and local sources also provided valuable information. Two of the threatened landmarks listed have friends groups that can be reached via the Internet. The Western of Alabama Railroad group, Old Alabama Rails, can be reached via e-mail. The Sand Island Lighthouse group has a website. For more information on the Places in Peril Program contact the Alabama Preservation Alliance at 334-834-2727 or by e-mail.

The following item in the Encyclopedia of Alabama will also be of interest:

About the Authors
Ed Hooker, Preservation Architect with the Alabama Historical Commission, and Brandon Brazil, Executive Director of the Alabama Preservation Alliance, organized this year's endangered properties committee and prepared the text for the Alabama Heritage article. Hooker, who holds a Bachelor of Architecture from Auburn University, coordinates HELP (Help Endangered Landmarks Program) for the historical commission. Brazil has a B.S. from Troy State University and is a candidate for a master's degree in historic preservation at the University of Georgia.

Other members of the endangered properties selection committee include Suzanne Wolfe, editor of Alabama Heritage; Robert Gamble, Ellen Mertins, Tom Maher, Stacy Hawthorne, Nathan Farris, and Mary Shell, all representing the Alabama Historical Commission; and Carole King, Charles Bullock, and Doug Purcell, all representing the Alabama Preservation Alliance. The authors also wish to acknowledge their indebtedness to Nathan Farris, Andrew Waldo, and Stacey Havvthorne, who made special contributions to this article.
To read about more places in peril, click here for our Places in Peril blog.
Back to Top 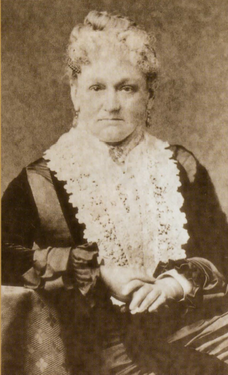 Eugenia Levy Phillips (1820-1902) spend several months during the Civil War confined on Ship Island, Mississippi, for "laughing and mocking at the remains of a Federal officer." "I was in good spirits the day of the funeral," she told General Butler. (Courtesy Southern historical Collection, University of North Carolina at Chapel Hill.)
Eugenia Levy Phillips vs. the United States of America

One of only a few Southern women imprisoned during the Civil War, Charleston native Eugenia Levy Phillips was just sixteen when she became the wife of Philip Phillips, a lawyer. Well-educated, outspoken, and fiery-tempered, Eugenia moved with her husband to Mobile, Alabama, where they lived for eighteen years, moving to Washington, D.C., when Phillips was elected to Congress. There, in 1861, Eugenia was briefly put under house arrest for suspected pro-Confederate sympathies. The family then moved to New Orleans, where Eugenia soon ran afoul of Union general Benjamin F. Butler. For the crime of laughing at the funeral procession of a Union officer, Butler sentenced Eugenia to confinement in a Union prison on hot and barren Ship Island in the Gulf of Mexico. Unrepentant, she wrote her husband, "let me rot where I am." When Eugenia was released three months later, the family moved to Confederate-controlled La Grange, Georgia, for the remainder of the war. Eugenia Phillips died in Georgia in 1902 at the age of 82.


​
Additional Information
For more information on Eugenia and Philip Phillips and other Jewish Southerners during the Civil War, see:On General Butler and the Women's Order:The following articles in the Encyclopedia of Alabama will also be of interest:
About the Author
Joanna Jacobs, an editorial assistant at Alabama Heritage, holds a B.A in English from Haverford College in Pennsylvania. She has been an editorial intern at Alabama Heritage and Southern Accents magazines and has written for Southern Accents, entrée, Coastal Living, the Tuscaloosa News, and Alabama Heritage ("Northington General Hospital," AH 39).

Jacobs wishes to thank Rickie Brunner of the Alabama Department of Archives and History, Anna L. F. J. Singer, and Keenan Graham for editorial and research assistance.
Back to Top 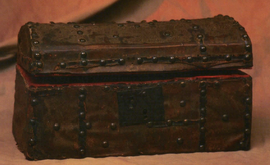 This leather-bound chest- and the three hundred dollars in gold that was secreted within- escaped capture by marauding Yankee troops in April 1865 when the author's great-great-grandmother, Mary Ann Aemp, hid it under a chicken coop. (Photograph by Rickey Yanaura)
Recollections
Hope Chest

As Yankee troops drew ever-closer in 1865, Mary Ann Kemp hid a leather-bound chest under a chicken coop. Inside was three hundred dollars in gold. Over the following years, the chest came to contain still more valuable treasures: the memories of generations. Bailey Thompson contributes to that treasure by recounting the story of the chest in full.

​
Additional Information
The following articles in the Encyclopedia of Alabama will also be of interest:
About the Author
Bailey Thomson is an associate professor of journalism at the University of Alabama. He lives in Tuscaloosa.
Back to Top
Art in the South
Nathan Negus and the Portrait of Gen. William McIntosh

The nine-foot painting of Gen. William McIntosh (c.1778-1825) that hangs today at the Alabama Department of Archives and History, Montgomery, has long been regarded as a masterpiece of frontier art. Long misattributed to Washington Allston, the painting is in fact the work of Nathan Negus, who has himself come to be regarded as the most talented practitioner of the fine arts in Alabama during the early statehood years.

About the Author
Laquita Thomson is an independent researcher specializing in the history of art and culture in Alabama. She lives in Georgia.
Back to Top
The Nature Journal
Pink Moccasins

Perhaps the most beautifully deceptive wildflower in North America is the pink lady's-slipper orchid, which lures insects with the promise of nectar as part of its reproductive cycle. The catch is that the lady's-slipper has no nectar; this deception-based pollination may be counter-productive, since very little pollen is ever transferred. L.J. Davenport examines this counter-intuitive method of reproduction.