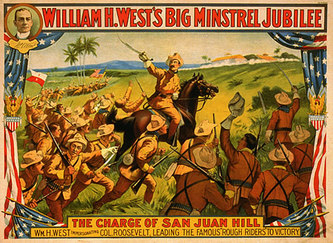 The story of Theodore Roosevelt's charge up San Juan Hill
was popular enough to inspire minstrel shows
(Library of Congress)
Bridging the Gulf: The Alabama-Cuba Connection

By Lawrence A. Clayton

A trade embargo against Cuba makes it nearly impossible for most Alabamians to visit the island nation just across the Gulf of Mexico from us. To understand the tragedy of this, one must look to the histories of Cuba and the state of Alabama and see how connected these two places really are. Since the Spanish conquistador Hernando de Soto first governed over the southeastern United States and the Caribbean, we have been tied to Cuba. In war, Cubans died on our soil and Alabamians died on Cuban soil. We share a complicated and exciting history of exploration, colonialism, war, trade, and even disease. A look at our shared past will attempt to bridge the gulf by revealing a bond that is stronger than the Iron Curtain that currently separates us.

Buy This Feature
Additional Information
For more information, please see Cubans in America: A Vibrant History of a People in Exile (Kensington Books), by Alex Antón and Roger E. Hernandez; Louis A. Pérez's Cuba and the United States: Ties of a Singular Intimacy (University of Georgia Press); or Jaime Suchlicki's Cuba: From Columbus to Castro (Charles Scribner and Sons).

About the Author
Lawrence Clayton, a professor of history at the University of Alabama, specializes in Latin America. Clayton became interested in Cuba while doing research for a biography of Father Bartolomé de las Casas (1485-1566), defender of American Indians. His last major book told the story of the relations between Peru and the U.S., Peru and the United States: The Condor and the Eagle, while the second edition of his textbook, A History of Modern Latin America, was published in summer, 2004. He has traveled to Cuba twice in the past three years retracing the footsteps of Las Casas.
Back to Top

Captain Thomas W. "Pete" Ray
(Southern Museum of Flight)
The Wings of Denial: The Alabama Air Guard in the Bay of Pigs


By Warren Trest and Don Dodd

In 1961, under terms of absolute secrecy, sixty Alabama Air National Guard members headed to Central America, recruited by the CIA to train Cuban revolutionaries to overthrow the Castro government. As one disaster after another jeopardized the success of the Cuban insurgents, eight Alabamians flew into the maelstrom of the Bay of Pigs to assist. Though some made the ultimate sacrifice, their contribution went unacknowledged until 1977.

Don Dodd is Professor Emeritus of History at Auburn University at Montgomery and the assistant director of the Southern Museum of Flight in Birmingham, Alabama.
Back to Top 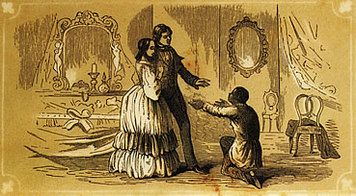 In 1834 Caroline Lee Hentz, a native of New England, arrived in the Deep South state of Alabama, where she would live for the next fourteen years. During that time, she would become one of the South’s most prolific, popular, and profitable antebellum authors, churning out an enormous volume of well-received plays, novels, stories, essays, and poems—virtually all of it written in Alabama. Her most famous book, however, was a pro-slavery response to Harriet Beecher Stowe’s abolitionist blockbuster Uncle Tom’s Cabin. Entitled The Planter’s Northern Bride, it was one of a wave of books defending slavery that appeared shortly after the publication of Stowe’s novel. Hentz’s book sold well throughout the North and South, and its importance as an example of “anti-Tom” literature secured her a place in history. But the real story behind Caroline Lee Hentz’s career as a writer is how she managed to achieve so much despite the best efforts of a bitter and chronically jealous husband.
Buy This Feature
Additional Information
The best biographical overview of Caroline Lee Hentz appears as part of Rhoda Coleman Ellison's superb introduction to the 1970 University of North Carolina Press reprint of The Planter's Northern Bride. A comprehensive and lively survey of her writings may be found in Benjamin B. Williams's 1979 Literary History of Alabama: The Nineteenth Century, from Farleigh Dickinson University Press. A smart, informative assessment of Hentza in relation to her literary contemporaries is given by Nina Baym in her landmark 1993 University of Illinois Press volume, Women's Fiction: A Guide to Novels by and about Women in America, 1820-70.

About the Author
Philip Beidler is Professor of English at the University of Alabama, where he has taught American literature for thirty years. His own long journey toward finding a home in Tuscaloosa began in, of all places to the north, Gettysburg, Pennsylvania, where he was born, and included southern sojourns in academical villages in Davidson, North Carolina, and Charlottesville, Virginia.
Back to Top 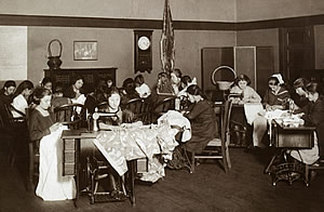 In 1912 an experienced Methodist social worker, Dorothy L. Crim, accepted a salary of fifty dollars per month to found a settlement house similar to Jane Addams’s Hull House in Chicago. Despite a host of obstacles to reform, the Ensley Community House, which opened the next year, served its community for fifty-six years. Located in the heart of the city’s Italian District, it sought to alleviate the problems many immigrant workers faced—especially the sense of alienation and isolation from mainstream American culture. Crim saw herself as “building up a Christian nation,” fervently believing that democracy itself was “Christianity in action,” and her greatest satisfaction came when the families she helped in turn served others.

The following article in the Encyclopedia of Alabama will also be of interest:
About the Author
With "A Settlement House in Ensley's Italian District," G. Ward Hubbs once again returns to the pages of Alabama Heritage. Now assistant professor and archivist at Birmingham-Southern College, Hubbs has been connected with Alabama Heritage  in one way or another since its beginning. He was our first assistant editor, and the magazine's first issue contained an article, co-written with Robert Cargo, about a Greene County quilt. Subsequent issues included articles on an Alabama-made automobile, and last year he contributed "The Guards' Civil War" (AH #71), excerpts from his book of Civil War diaries from Greensboro, Alabama. Last year was an important one for Hubbs in another way. His Guarding Greensboro: A Confederate Company in the Making of a Southern Community (University of Georgia Press) won the Jefferson Davis Award for the best book-length narrative of the Civil War. 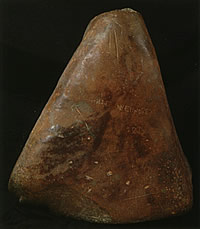 The Alabama Stone has been the focus
of interest since its discovery in 1817
(Alabama Department of
Archives and History;
Robert Fouts)
Alabama Treasures
Mystery of the Alabama Stone

The Alabama Stone, a two-hundred pound slab of sandstone bearing a mysterious Latin inscription, has been the focus of historical investigations and speculative theories since its discovery on the banks of the Black Warrior River in 1817.

Additional Information
The following articles in the Encyclopedia of Alabama will also be of interest:Multimedia:
About the Author
Bard Cole is an essayist, short story writer, and assistant editor at Alabama Heritage.

Back to Top
Art in the South
An Unlikely Canvas

Beginning in the late 1930s, the Treasury Section of Fine Arts selected artists to decorate post offices across the country. Though Arthur Getz's mural "Cotton Field" reflects the heritage and history of Luverne, it was painted on panels in Getz's New York studio and mailed to Alabama.

About the Author
Jim Noles, a frequent contributor to Alabama Heritage, is a partner in the Birmingham office of the law firm Balch & Bingham LLP. His most recent book is Hearts of Dixie: Fifty Alabamians and the State They Called Home (Birmingham: Will Publishing, 2004).
Back to Top

Jack McGowin knew the dangers of keeping a journal--if the enemy found it, his fellow sailors would be sunk; if his superiors found out about it, he would be court martialed--and yet he was compelled to make note of the events that unfolded during the Second World War.

About the Author
Sam Duvall is a frequent contributor to Alabama Heritage.
Back to Top 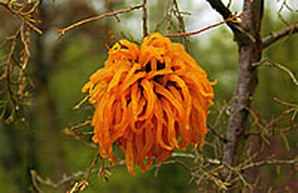 The fungus known as cedar apple rust (CAR) is an easily-recognized growth on cedar trees. Its life cycle requires two hosts: the cedar and the apple. L.J. Davenport outlines the life cycle of CAR and muses on the ways in which the cycle can be broken.