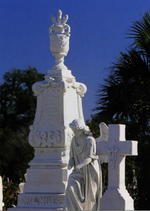 The form and variety of funerary sculpture in Magnolia is remarkable. (Photograph by Chip Cooper)
The Tangible Past: Mobile's Magnolia Cemetery

Mobile's Magnolia Cemetery is rich in tradition and folklore, as the burial ground for Alabama governors, congressmen, mayors, generals, doctors, lawyers, writers, plague victims, Jews, free blacks, society women, and even Apache warriors. But the story of Magnolia Cemetery itself is rich; its existence parallels the evolution of cemeteries in the United States, while its exceptional sculpture strikingly demonstrates the Victorian acceptance, even celebration, of death. The article notes how the founding, growth, neglect, and recent triumphant restoration of this nineteenth-century cemetery make for an important story in our own death-denying age.

Additional InformationThe following articles in the Encyclopedia of Alabama will also be of interest:Multimedia:
About the Author
John Sledge holds a master's degree in historic preservation from Middle Tennessee State University. An architectural historian with the Mobile Historic Development Commission since 1985, Sledge has lectured on historic cemeteries and their preservation in Mobile and the Black Belt. In an effort to provide for better care and maintenance of Mobile's oldest extant cemetery, he helped form the Church Street Graveyard Preservation Foundation. As one of its first projects, the Foundation plans to clean and restore several of the graveyard's cast-iron fences. "Some people think of cemeteries as morbid," he writes, "but these places provide a reflective counterpoint that modern society desperately needs."
Back to Top 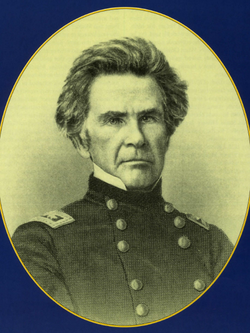 General O.M. Mitchel (1809-1862) occupied Huntsville with his Federal troops during the spring and summer of 1862. The experience was not pleasant for Huntsvillians or the general. (From Ormsby MacKnight Mitchel: Astronomer and General, by F.A. Mitchel, 1887)
Old Stars in Alabama: General Ormsby M. Mitchel

General Ormsby M. Mitchel , called "Old Stars" by his troops, swept into Huntsville with the vanguard of the Third Division of the Army of the Ohio on the morning of April 11, 1862. Author Kay Cornelius writes of Mitchel's promise of military genius, noting the aggressive strategies which led him to Huntsville, further into enemy territory than any other Union leader. Also noted is his ongoing battle with the Union military bureaucracy which often thwarted his efforts, as well as his stay in Huntsville, where the local citizens reviled him as evil incarnate. This comes together as the intriguing story of a man who made himself the object of so much hatred on one hand and so much admiration on the other.

Additional Information
Chadick, Mrs. William D. "Civil War Days in Huntsville, a Diary." Alabama Historical Quarterly, Vol. 9 (1947).
Clay-Clopton, Virginia. A Belle of the Fifties (Doubleday, Page and Company, 1904)
Foote, Shelby. The Civil War: A Narrative (Random House, 1958).
The following articles in the Encyclopedia of Alabama will also be of interest:
About the Author
Historical novelist Kay Cornelius, who has taught English in Huntsville public schools for twenty-five years, became interested in Ormsby Mitchel while researching for a novel set in 1862 Huntsville. That novel, More Than Conquerors, was recently published by the David Barbour Company as part of its Heartsong series. Cornelius' first novel, Love's Gentle Journey, is set during the 1740s Scots-Irish migration. She is working on a sequel to that novel, this one set in the 1760s on the Pennsylvania-Virginia frontiers.
Back to Top
Alabama's Most Endangered Historic Places

In 1994, the National Trust for Historic Preservation launched a nationwide effort to highlight historic places most endangered in this country. This effort in Alabama, sponsored jointly by the Alabama Historical Commission and the Alabama Preservation Alliance, aims to publicize threatened historic places in the state through news releases and other means. This article features the plights of ten such endangered sites, ranging from the Marmaduke Williams House in Tuscaloosa to the Greyhound Bus Station in Montgomery, each with its own important place and story in the history of Alabama.

About the Authors
Mary Elizabeth Johnson Huff is a south Alabamian whose writing career has included a turn in New York City with various well-known publishing companies, including The Reader's Digest. She started the crafts program for Oxmoor house, the book publishing division of Southern Living, and has written and edited numerous quilt, craft, and decorating titles. Her latest publication, The American Quilt, named by The New York Times Book Review as one of 1993's "Notable Books," was published by Clarkson N. Potter, a division of Random House.

Huff recently announced her association with Black Belt Press of Montgomery, where she will head an eponymous imprint. She is a member of the board of the Alabama Preservation Alliance.

Robert Gamble is senior architectural historian, Alabama Historical Commission. His 1987 guide to Alabama architecture, The Alabama Catalogue, Historic American Building Survey: A Guide to the Early Architecture of the State, published by the University of Alabama Press, won thee Antoinette Forrester Downing Award given annually by the Society of Architectural Historians.

The Parmer Murrell house, discussed on page 33, was first featured in the may 1990 issue of Montgomery magazine in an article by Jim Upchurch.
To read about more places in peril, click here for our Places in Peril blog.
Back to Top

Alabama Heritage is proud to present an excerpt from Kathy Kemp's Revelations: Alabama's Visionary Folk Artists (Crane Hill, 1994). This selection discusses the life and career of W.C. Rice, a man who found religion and, eventually, his calling as an artist.

About the Author
Kathy Kemp is the author of Revelations: Alabama's Visionary Folk Artists (Crane Hill, 1994).
Back to Top 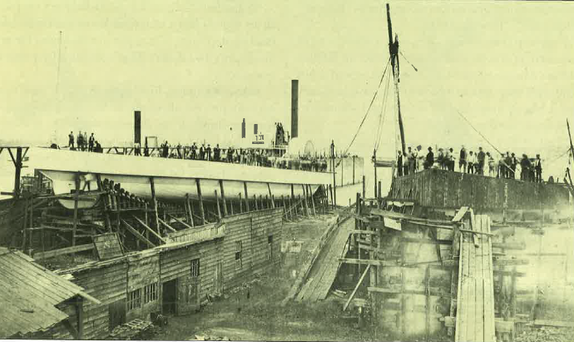 The only known photograph of the monitor USS Tecumseh, painted white, was taken shortly before the ship was launched from the Jersey City, New Jersey, shipyard in 1863. The Tecumseh later hit a mine and sank in the Mobile Bay, where she still rests today. Also pictured is the Tecumseh's sister ship, the Mannahata (later re-names the Manhattan), which was launched a month later. The original print of this rare photograph is 23" wide by 15 3/4" tall, mounted on a paperboard with an inscription, "Brady and Co.," referring to the company of Civil War photographer Matthew Brady. (Courtesy the Museum of the City of Mobile)
Southern Architecture and Preservation
'Damn the Torpedoes! Full Speed Ahead!'

The only known photograph of the monitor USS Tecumseh was taken shortly before the ship was launched from the Jersey City, New Jersey, shipyard in 1863. The Tecumseh later hit a mine and sank in Mobile Bay, where she rests today. This rare, historic photograph now resides at the Museum of the City of Mobile.

Additional Information
The following itemsin the Encyclopedia of Alabama will also be of interest:
About the Author
Mindy Wilson, a graduate student in creative writing at the University of Alabama, is a former intern of Alabama Heritage. The editors wish to thank the Museum of the City of Mobile for assistance with this column.
Back to Top
The Nature Journal
The Case of the Vermilion Darter

The vermilion darter, which exists entirely within a total range of three stream miles at the headwaters of Turkey Creek, offers ichtyologists a golden opportunity to study the ways in which speciation occurs within closed-off populations. Its numbers have recently dropped because of its proximity to suburban areas. The darter provides not only an example of speciation but a vivid example of the need to protect all living creatures--both known and unknown.