By Richard Dice and the Alabama Heritage staff

The year was 1950--the days of iron and dirt. "Iron" was what they drove in: the car, in this case stock cars with modified engines. "Dirt" was what they drove on: the track. It was also what they called what they were doing: the driving. Every stock car driver who had "iron" in those days "drove dirt." In fact, this period, from the thirties to the early fifties, was the heyday of dirt in racing. This is the story of the men who drove dirt, the men for whom racing was not merely a pastime. Their names were Howell, Eddie Martin, George Fleming, and Jerry Massey. For them, driving dirt was a way out, thrilling and profitable. This is the story of races legal and illegal, of triumph and tragedy, of the days of iron and dirt.

About the Author
Richard Dice, a fiction writer, has an M.F.A. from the University of Alabama in creative writing. Currently, Mr. Dice teaches creative writing at Shelton State Community College, where he is also the coordinator of the Adult Studies Program. Mr. Dice's fiction has appeared in the Black Warrior Review and other magazines. Dice, who grew up in Birmingham, was a sometime spectator of the races in Midfield. He says the drivers he remembers most--his favorites anyway--were the ones with the great names: Iggy Katona, Friday Hassler, Hooker Hood, and Nero Steptoe.

For contributing their photographs and their memories, the editors and the author wish to thank George Fleming, Eddie Martin, Jerry Massey, Lucky Mayes, Bobbi McKleroy, B. J. Parker, and Dominic Sanfilippo.
Back to Top 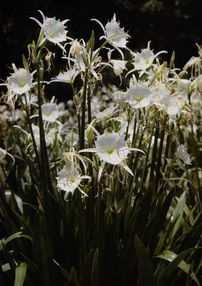 In the summer of 1989, the US Fish and Wildlife Service asked L.J. Davenport to travel throughout Alabama and adjoining states studying the Cahaba or shoals lily (Hymenocalis coronaria), a species of spiderlily noted for its striking, three-inch broad white flowers. The lily, which is among Alabama's rarest plants, grows in the rocky shoals of rivers and streams. Its informal name, the Cahaba lily, arises from its proliferation along the Cahaba River. In this article, Davenport recounts his travels in search of the Cahaba lily.

About the Author
Larry Davenport's first contribution to Alabama Heritage appeared in the fall of 1988, when AH published his article on the distinguished nineteenth-century botanist, Charles Mohr. In this issue, Davenport turns his attention to the rare and graceful Cahaba lily, a plant that Charles Mohr studied a century before. "In pursuit of the Cahaba lily,' recalls Davenport, "I've managed to slip and fall into every river in central Alabama and Georgia." He has struggled through catbriers on the Cahaba, encountered a water moccasin on the Tallapoosa, and nearly drowned in the Coosa. "All in the
name of science,' he assures us.

For anyone interested in viewing Cahaba lilies from the safety of an automobile, Davenport suggests driving to Piper, Alabama, in Bibb County. Lilies can be seen from the Piper Bridge over the Cahaba River, on County Road 24, between West Blocton and Montevallo.

When not pursuing the Cahaba lily, Davenport teaches biology at Samford University. Last year he was chosen first recipient of the Student Government Association's Outstanding Faculty Award.
Back to Top 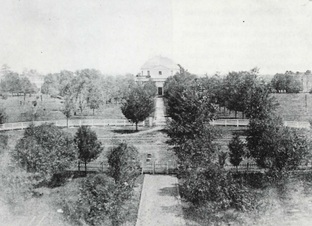 The Burning of the University of Alabama

Monday, April 3, 1865. The cadets at the University of Alabama pursued their normal school-day routine.  They dressed and answered the call of the long roll at six o'clock, began classes at eight, and drilled at four. Their strictly regimented lives went on as they had every day, as they would every day for the foreseeable future. Or so it would seem. But, even then, the Union army was marching across the countryside. The next day, Federal troops, under the command of General Croxton, had possession of Tuscaloosa. And on that day--April 4, 1865--General Croxton made a decision that would change the University forever and set back education in the state by years. Under the command of Colonel Johnson, the Second Michigan Cavalry made their way to the University and burned it to the ground. This is the story of the days leading up to that fateful decision.
Buy This Feature
Additional Information

About the Author
Clark Center, who holds both the A.B. and M.A. degrees in history from Samford University, is a reference archivist in the William Stanley Hoole Special Collections of the University of Alabama Library. He became interested in the history of the University of Alabama, and especially its Civil War period, while helping others with their research. "Over the years I've helped a number of people find information on various aspects of the University and the Alabama Corps of Cadets. In doing so I became familiar with both the events and the sources and developed quite an interest. One day I realized that I knew quite a lot about it."
Back to Top