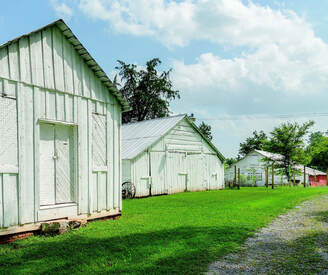 Alabama Heritage readers were introduced to the McCrarys in Issue 91: “The McCrarys of Madison County: Two Hundred Years and Counting” by Joseph Jones. In his latest feature, Jones brings us up to date on some recent developments with the family. First, the family has consolidated land into a trust, which includes approximately the same amount of land as Thomas McCrary held when he died in the late nineteenth century. Second, Rosemary McCrary has recreated the original farmhouse on its original land, creating a space well-suited to preserving the history of the home, the family, and their contributions to the community. Jones traces the family’s history and illustrates the importance of these efforts to preserve its legacy.

About the Author
Joseph M. Jones—eighty-nine years old and a former Montgomery, Alabama, newsman—joined Army forces at Huntsville’s Redstone Arsenal as a civilian employee in public relations in 1956. In late 1959, he was chosen as one of a few to make ready the establishment in 1960 of the NASA-Marshall Space Flight Center from within the Army organization. He became the first director of the Marshall Center news department and worked as the news chief for fourteen years. From news director, he became director of public affairs, where he worked until retirement. In those NASA capacities, he traveled widely, frequently with Marshall director Wernher von Braun. He worked at and witnessed the launching of each of the Marshall Center’s thirty-two Saturn rockets, the world’s largest, as well as the earliest space shuttles. He wrote the five-page press kit for the free world’s first satellite, Explorer I, and participated with many others in preparing the 250-page press kit for man’s first landing on the moon. His published writings include The Wondrous McCrarys—Alabama Pioneers: Same Family, Same Farm, 200 Years; My Times—Boxwoods Among the Rockets, a memoir; and Doing the Possible, a history of the oldest church in his native Cleburne County, Alabama. Each is available on Amazon.com.

Additional Information
Readers who are new to the McCrary family’s story may wish to read “The McCrarys of Madison County: Two Hundred Years and Counting” by Joseph Jones, which appeared in Alabama Heritage Issue 91.
Back to Top 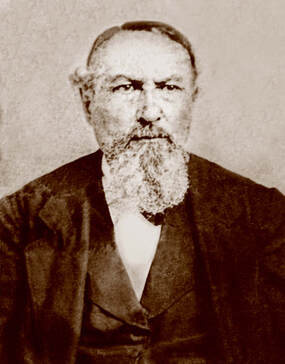 Born into slavery, Shandy Jones appeared to have few prospects for success in nineteenth-century Alabama. Despite that, after being freed as a youngster, Jones grew into a prosperous citizen and legislator. As a Black man, however, he often found his success and his work towards equality met with vitriol and the threat of violence. G. Ward Hubbs traces Jones’s life and the forces that challenged him, offering a portrait of Alabama life both before the Civil War and in the era that followed. In the process, he explores early attempts to integrate the University of Alabama and the role some newspapers played in perpetuating segregation and encouraging violence against formerly enslaved people.

About the Author
G. Ward Hubbs started his career as Alabama Heritage’s first assistant editor. He then spent two decades at Birmingham-Southern College, where he is now professor emeritus and archivist for the Methodists in North Alabama. His research into the ideas and values of everyday Alabamians in the nineteenth century led to several books: Guarding Greensboro (University of Georgia Press) won two national awards for the best book written on the Civil War. Searching for Freedom: Klansman, Carpetbagger, Scalawag, and Freedman (University of Alabama Press), from which this article on Shandy Jones is drawn, won a regional award; even better, the book’s publication introduced him to the close-knit descendants of Shandy Jones. And last year, the Alabama Historical Association presented his Tuscaloosa: 200 Years in the Making (also University of Alabama Press) with the Coley award. Guy and his wife, Pat, live in Tuscaloosa.

Tuscaloosa: 200 Years in the Making http://www.uapress.ua.edu/product/Tuscaloosa,7065.aspx
Back to Top 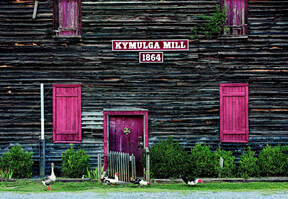 Watermills offer a picturesque break in the natural landscape, though they are increasingly harder to spot as technology advances. However, Alabama’s wonders include the Kymulga Grist Mill, built in 1864 and still standing over 150 years later, despite being slated for destruction during the Civil War. Through photographs and text, Ken Boyd recounts the structure’s history and value, offering an important plea for its preservation and protection.

About the Author
Ken Boyd has been a passionate, enthusiastic, and award-winning photographer and writer for more than four decades. His latest book, entitled Historic Watermills of North America, A Visual Preservation, is scheduled for release by the University of Alabama Press in November 2020. He has previously published two popular and internationally distributed books on locomotives entitled Historic North American Locomotives (Kalmbach Publishing Company, 2018) and The Art of the Locomotive (Voyageur Press, The Quartos Group, 2014). Boyd is also the editor for The Mid-South Flyer, a bimonthly publication of the Railway & Locomotive Historical Society, and his work has been featured in several other historic books and in numerous magazines, journals, and trade publications. He has taught photography at the University of Alabama at Birmingham and Samford University since 1985. 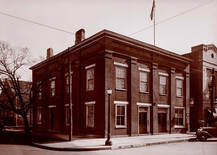 Helen Keller and the Little Library that Could

While many parts of Helen Keller’s life story are well known, less familiar are her contributions to generations of readers in her hometown of Tuscumbia. As a young woman studying in Boston, Keller wrote a letter home with a seemingly simple question: her school had a grand library. Why didn’t Tuscumbia offer its citizens something similar? From that question, emerged the Helen Keller Library and Literary Association, which evolved over time into the Helen Keller Public Library—an institution that continues to serve Keller’s hometown still today.

About the Author
Emily McMackin Dye is a freelance features writer based in Memphis, Tennessee, and a native of Tuscumbia, Alabama, who grew up attending story times and checking out books at the Helen Keller Public Library. She has a longtime affinity for Helen Keller thanks to her father, the late Mike McMackin, who founded the Helen Keller Festival and served on the Helen Keller Property Board at Ivy Green for more than thirty years. Dye graduated from the University of Alabama in 2000 with an MA in literary journalism and writes about history, historic preservation, and culture for custom and newsstand magazines.  Special thanks for research assistance with this article goes to librarian Tammie Collins and the late Terrye Sledge Terry, whose written histories of the library proved invaluable to the story.

Additional Information
The Story of My Life by Helen Keller (1903) https://www.amazon.com/Story-My-Life-Helen-Keller/dp/0486292495

Perkins School for the Blind https://www.perkins.org/history

American Foundation for the Blind’s Helen Keller archive https://www.afb.org/HelenKellerArchive
Back to Top 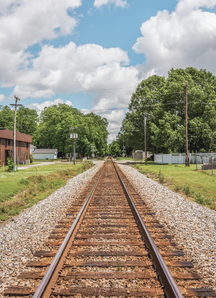 Portraits and Landscapes
The Trail of Tears in the Muscle Shoals National Heritage Area: Then and Now

One of Alabama’s many treasures is the Muscle Shoals National Heritage Area (MSNHA), which includes land in six of the state’s counties. This area contains natural wonders, such as the Muscle Shoals of the Tennessee River, but it has also witnessed a substantial amount of significant and painful human history, including the removal of many indigenous people along the Trail of Tears. Some Native American families began their forced migration along the river in what is now MSNHA land. Today, officials at MSNHA have embarked on a number of projects designed to preserve the history of this land and to promote dialogue around historic and ongoing instances of injustice.

About the Author
Carolyn Barske Crawford is the executive director of the Muscle Shoals National Heritage Area and teaches courses in historical administration and exhibit design for the University of North Alabama Department of History.

Additional Information
To learn more about the MSNHA, please visit its website at https://msnha.una.edu/
Back to Top 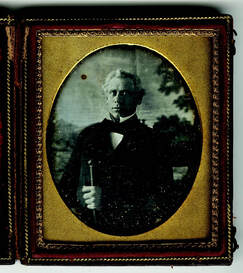 Behind the Image
Color My Garden Black and White

In this quarter’s installment of “Behind the Image,” Frances Robb leads us through the history of the daguerreotype and its intersection with Cahaba, Alabama, best known in the 1850s for its abundant flora. At the center of the tale is prominent citizen William Fambro, whose image (by William Worthy Barnes) provides evocative visual evidence for Robb’s account.

About the Author
Frances Osborn Robb is the contributing editor for the “Behind the Image” department of Alabama Heritage. She is the author of Shot in Alabama: A History of Photography, 1839–1941, and a List of Photographers (University of Alabama Press, 2016).

Additional Information
Shot in Alabama: A History of Photography, 1839-1941, and a List of Photographers by Frances Osborn Robb (University of Alabama Press, 2017) http://www.uapress.ua.edu/product/Shot-in-Alabama,6501.aspx
Back to Top

From the Archives
A Virtual Exploration: Alabama History@Home

It’s no secret that the pandemic has shifted ways of life for individuals throughout the world. However, it has also had profound effects on institutions. Fortunately for us all, the staff at the Alabama Department of Archives and History (ADAH) has nimbly adapted to the changing circumstances, creating a wealth of resources available to people researching or learning from home. Chief among these resources is the ADAH’s new statewide initiative called "Alabama History@Home," a new website that serves as a clearinghouse for exploring the state’s history through online resources. Thanks to this site, Alabamians and others interested in the state’s history can discover streaming media, educational materials, and resources from partner organizations.

About the Author
Alex Colvin, PhD, is public programs curator at the Alabama Department of Archives and History.

Additional Information
To begin enjoying the many resources available, please visit alabamahistoryhome.org.
Back to Top 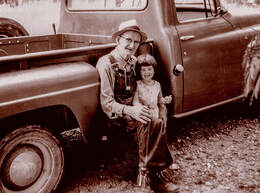 Adventures in Genealogy
Embracing the Genohistorian Within

In this quarter’s installment of “Adventures in Genealogy,” Donna Cox Baker evaluates her own genealogy experiences and how her training as a historian has influenced that journey. In the process, she explores that connection between genealogy and history, proposing a new field, genohistory, where they intersect.

About the Author
Donna Cox Baker is the director of Alabama Heritage. She wrote Zotero for Genealogy: Harnessing the Power of Your Research and blogs at gegbound.com and genohistorian.com.

Zotero for Genealogy: Harnessing the Power of Your Research by Donna Cox Baker https://goldenchannelpublishing.com/product-tag/zotero/

The Zotero Solution: Knowledge Management for the Scholarly Researcher by Donna Cox Baker https://goldenchannelpublishing.com/product/zotero-solution-pdf/
Back to Top 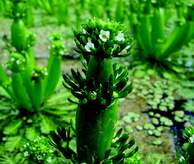 When a biological mystery arises, you can be sure that Alabama Heritage’s resident naturalist is on the case. This time, it involves a puzzling form of plant life called the featherfoil—an occasional visitor to Tarrant’s North Lake.

About the Author
Larry Davenport is Paul N. Propst Professor of Natural Sciences at Samford University, Birmingham, and is coauthor (with Ken Wills) of Exploring Wild Alabama (University of Alabama Press, 2016).

Additional Information
To purchase the books mentioned in the column, please see the following.
Shot in Alabama: A History of Photography, 1839-1941, and a List of Photographers by Frances Osborn Robb (University of Alabama Press, 2017) http://www.uapress.ua.edu/product/Shot-in-Alabama,6501.aspx