The ruins of a lone cabin at Lake Jordan are all that is left to commemorate the Dixie Art Colony. This bohemian retreat, founded by local artist J. Kelly Fitzpatrick, helped to instruct and mold many well-known southern artists of the 1930s and 40s. Lynn Barstis Williams chronicles the many struggles involved in creating the atmosphere and mission of the Dixie Art Colony, from its inception to its eventual home near Wetumpka. Williams presents photographs from the colony as well as interviews with colony participants and their letters to fully detail the daily workings and familial atmosphere of this summer camp for aspiring artists. Glimpses into the lives and accomplishments of some of the colony’s most successful participants, such as Warree LeBron, Mildred Wolfe, and Arthur Stewart, accompany this history of the colony.

Additional Information
No secondary works solely on the Dixie Art Colony have been published, but archival material is available at the Montgomery Museum of Fine Arts and in the papers of the Alabama Art League in Auburn University Archives, Ralph Brown Draughon Library, Auburn University. Lynn Williams would like to hear from people who own paintings or other works of art that can be verified as having been done by the colonists during the period 1933-47. Phone: Aubum University Libraries (334) 844-1768.

The following items in the Encyclopedia of Alabama will also be of interest:
About the Author
Lynn Williams is Humanities Reference Librarian for art and foreign languages and literatures at Auburn University Libraries. She holds a master's degree in library science as well as MA and Ph.D. degrees in comparative literature from the University of Illinois. Compiler of American Printmakers, 1880-1945: An Index to Reproductions and Biocritical Information (1993) and the author of "Printmaking as a Bozart of the South, 1914-1945" (forthcoming from Southern Quarterly), Williams collects prints by Southern artists and has been researching Alabama painters of the 1930s and 1940s.
Back to Top

One of the South’s most celebrated artists of the 1930s and 40s, J. Kelly Fitzpatrick overcame many personal trials before immersing himself in a world of art and creative growth. The trauma of a gruesome battle in WWI led him to forsake a privileged material life for a spiritual one dedicated to art. Margaret Lynne Ausfeld and Christine C. Neal recount how Fitzpatrick managed to channel his love for art into a public service by taking a large role in creating institutions like the Alabama Art League and the Montgomery Museum of Fine Arts.

About the Authors
In 1991 the Montgomery Museum of Fine Arts, with assistance from the Blount Foundation, mounted a very popular exhibit entitled "Symphony of Color: The World of Kelly Fitzpatrick, 1888-1953," curated by Christine C. Neal, then the museum's assistant curator of art. This article, adapted from the exhibit's catalogue essay, was researched by Ms. Neal and written by Margaret Lynne Ausfeld, the museum's current curator of paintings and sculpture. Ms. Neal has since become curator of European and American art at the Museum of Art and Archaeology, University of Missouri-Columbia. 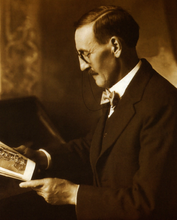 Believing that unbridled individualism was a curse. Ernest B. Gaston (1861-1937), one of the founders of Fairhope, developed a concept with the apparently paradoxical title "cooperative individualism." (Courtesy Paul M. Gaston)
Man and Mission: E. B. Gaston and the Fairhope Single Tax Colony

In the late nineteenth century, E. B. Gaston took his desire for social and political reform to the Gulf Coast of Alabama and founded the single tax community of Fairhope. Only one of many attempts to create a utopian secular society by social reformists at the turn of the century, Fairhope, having lasted over one hundred years, is the most successful of these attempts. Paul Gaston tells how the town’s founder, a man from Des Moines, Iowa, orchestrated and managed this community-owned town and succeeded where so many others had failed. Fairhope has faced many social and ethical problems, from deciding to segregate the colony at its beginning, through the turbulence of the Civil Rights movement, to the lack of community-owned land today that threatens the town’s ability to expand while maintaining its original ideals. Fairhope has evolved in a very peculiar way, from a utopian society that advocated social reform, to a typically conservative southern town.

Additional Information The following articles in the Encyclopedia of Alabama will also be of interest: Multimedia:
About the Author
Paul M. Gaston, professor of history at the University of Virginia, was born and reared in Fairhope, where he graduated from the colony's "Organic School." Grandson of colony founder E. B. Gaston, Professor Gaston has written extensively about the single-tax colony, including two books available from The Black Belt Press at (334) 265-6753 or 1-800-959-3245: Man and Mission: E. B. Gaston and the Origins of the Fairhope Single Tax Colony (1993), from which this article is adapted, and Women of Fair Hope (1993), originally published by the University of Georgia Press. An earlier work, The New South Creed (Knopf, 1970), won the Lillian Smith Award for distinguished writing about the South.
Back to Top 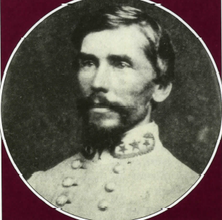 Irish-born Patrick Ronayne Cleburne (1828-1864), twice voted the formal thanks of the Confederate Congress for his bravery in action, risked his career and reputation to put forth an unpopular proposal. (Courtesy Alabama Department of Archives and History)
General Cleburne and the Emancipation of Slaves

Determined to put an end to the Civil War, Irish-born Patrick Ronayne Cleburne put forth a proposal that many regarded as treasonous: He proposed that slaves be trained and armed to fight for the South with the promise of emancipation of every slave in the South at the conclusion of the war. Mark Hull explores how this Irish immigrant worked his way up from poor soldier to successful lawyer and renowned hero of the Army of Tennessee. After years of great leadership and heroic assaults, the lack of manpower and excessive loss of life on the Confederate side led Cleburne to draft a proposal that may have changed the outcome of the war. Cleburne’s suggestions were first ridiculed, and then plagiarized, by another Confederate leader to try and mask his own strategic inefficiency. Cleburne’s daring proposal had negative, and eventually fatal, effects on his military career and personal life.
Buy This Feature
Additional Information
The following articles in the Encyclopedia of Alabama will also be of interest:
Multimedia:

About the Author
Mark McClellion Hall, associate professor of history at Alabama A & M University, Huntsville, has wide-ranging interests that include American military history, Irish history, and the archaeology and languages of the Maya. Mr. Hull, who served as a commissioned officer in the United States Army for over ten years, is a graduate of The Citadel, Jacksonville State University, and The Cumberland School of Law.
Back to Top

There is a hillside in Homewood, Alabama, famous for its amphibians. With the first warm, rainy night of spring, salamanders, frogs, and toads rouse themselves from their winter stupors to wriggle, squirm, and hop downhill. Humans, fascinated by this event, gather below to watch. One of the major participants in this annual spectacle is the spotted salamander. L.J. Davenport examines the habits of this far-ranging amphibian.