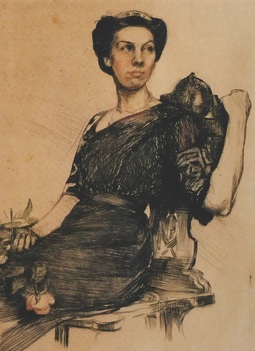 "Lady in Black" by Clara Weaver Parrish, hand-colored etching on paper. (Montgomery Museum of Fine Arts)
Daughters of the South

Determined to express themselves as artists, Clara Weaver Parrish and Anne Goldthwaite, two women from Alabama, broke the mold set for them by society. These women are connected, not by a shared artistic vision, but by their courage in striking out on their own and producing strikingly original work. This article offers an appreciation of these two women, both daughters of the South. It analyzes their individual styles and compares those styles to the prevailing artistic fashions of the time, suggesting the ways in which these artists make a unique contribution to the history of Alabama art.
Buy this Feature
Additional Information

About the Author
Chris Neal, assistant curator of paintings and sculpture at the Montgomery Museum of Fine Arts, has two degrees in art history, a bachelor's from Bucknell University and a master's from the University of Wisconsin, Madison.

This article was inspired by an exhibition, "Daughters of the South," sponsored in 1989 by the Montgomery Museum of Fine Arts and the Women Artists Committee for the Alabama Reunion, organized by Catherine Cabaniss. The exhibition was curated by the author and by Miriam Fowler, gallery director, Alabama State Council on the Arts.
Back to Top 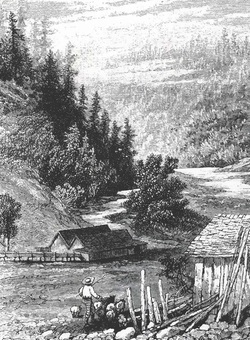 The gold rush stampede in the South began in full force in 1829. Prospectors came on foot, on horseback, in wagons. They came expecting to strike it rich by mining or panning for gold. In some Southern states, such as Georgia, mining reached a high level of technical sophistication. Not so in Alabama. In 1839 one Randolph County miner reportedly discovered $4,000 worth of gold in a single day. For most Alabama miners, however, a good day's work produced only a few dollars, and, on the whole, Alabama contributed only a fraction to the amount of gold mined in the South during this period. This article surveys the high hopes, hard work, and crushing disappointments that attended Alabama's gold rush.
Buy this Feature
Additional Information

About the Author
Lewis Dean, a native of North Carolina, grew up in Alabama and received his bachelor of science degree in geology from the University of Alabama and his master of science degree in geology from Emory University. He has worked as a geologist for the past ten years, involved in mineral resource studies. The author would like to thank Brenda Whittaker for research of Bureau of the Mint records in the National Archives and Sharon Deck for assistance with the manuscript.
Back to Top 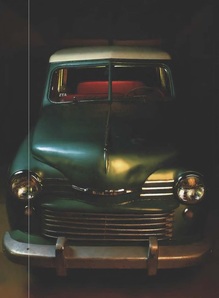 About the Author
G. Ward Hubbs, assistant editor of Alabama Heritage, still owns his first car, a '56 Chevrolet he inherited from his grandfather. Hubbs has edited a collection of southwestern humor, Rowdy Tales from Early Alabama (University of Alabama Press, 1981) and he is the author of Tuscaloosa, Portrait of an Alabama County (Windsor Publication, Inc., 1987).

Anne R. Gibbons, a native of Tuscaloosa, has been a professional writer and editor for seventeen years. Gibbons, who currently works as a writer for the University of Alabama System, has published articles and stories in numerous publications, including Birmingham Magazine, Agnes Scott Alumnae Magazine, Britannica Book of the Year, and Fantastic Flyer.

The Keller station wagon pictured in this article is owned by Buzz Howell of Hartselle, Alabama, whose grandfather, Hubert Mitchell, ran the Keller Motors Corporation. He also owns the photographs and original company records on which this article was largely based. Howell wants to find a good home for his grandfather's car and papers, preferably here in Alabama.
Back to Top

The Mobile Historic Development Commission has developed and Endangered Properties List, including two dozen important local historic buildings threatened by vacancy, deterioration, and neglect. Among the criteria for inclusion on the list is the requirement that a building be salvageable by reasonable means. Terminal cases are avoided. This article discusses some of the houses appearing on the list.

About the Author
John Sledge is an architectural historian for the Mobile Historic Development Commission.
Back to Top