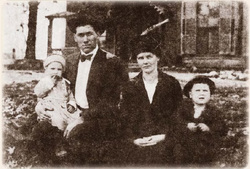 Ask anyone who grew up near Clay County if they know about Rena Teel, and chances are, they will respond with a slew of stories about her. Known throughout the Southeast for her prescience, Teel established herself as a reliable and trustworthy resource for people in need. Most of her readings were routine: helping clients find misplaced possessions or wayward livestock or regaling high school seniors with a glimpse of their futures. However, Teel also proved a valuable asset in emergencies, and desperate Alabamians routinely sought her services. Throughout her lifelong career, Teel located missing children, helped authorities solve crimes and discover bodies, and even prevented a murder.

About the Author
A graduate of Davidson College, Elizabeth Wade is pursuing a PhD in American literature at the University of Alabama. She has served as an assistant editor for Alabama Heritage for several years, and she has also worked as an assistant editor for Black Warrior Review. She co-authored, with Philip Beidler, “Ruby Pickens Tartt: Citizen of the World” in AH 87. Her poetry and nonfiction have appeared in or are forthcoming from such publications as Hayden’s Ferry Review, New South, Harpur Palate, and Spoon River Poetry Review. 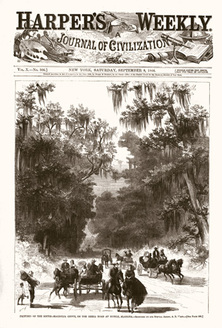 Before the easy and economical reproduction of photographs was possible, newspapers used engravings to offer readers an artistic glimpse of recent events. Alabama was featured in many such engravings, exposing readers worldwide to life in the “exotic” American South. Archivists Kelsey Bates and Jim Baggett discuss the techniques and content a variety of these engravings, all drawn from the Birmingham Public Library’s collection and travelling exhibit titledAlabama Illustrated. From scenes of the Civil War to cyclones trade, from enslaved workers to society balls, these engravings reveal important aspects of Alabama’s past and help readers see the world as nineteenth-century newspaper readers perceived it.

About the Authors
Kelsey Scouten Bates is assistant archivist and grants writer at the Birmingham Public Library. She has an MS in professional writing from Towson University and has served as an adjunct instructor at Samford University. She formerly taught English as a second language in Taiwan and the U.S. and worked as a grants writer for the Baltimore Museum of Art. Bates writes about Birmingham history and southern foodways for Birmingham magazine and other publications.

James L. Baggett is head of the Department of Archives and Manuscripts at the Birmingham Public Library and archivist for the city of Birmingham. He holds an MA in History from UAB and an MLIS from the University of Alabama. He has served as president of the Society of Alabama Archivists and chair of the Jefferson County Historical Commission. Baggett is an occasional contributor to Alabama Heritageand the author or editor of three books on Birmingham history, including Historic Photos of Birmingham.

Bates and Baggett have collaborated on a new publication, Alabama Illustrated: Engravings from 19th-Century Newspapers (Turner Publishing, 2009), and this article is drawn from that publication. 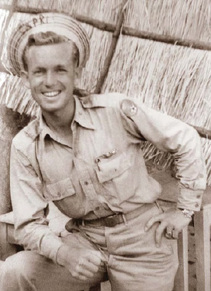 Bill Tune on the Isle of Capri
(William S. Tune)
From Alabama to Amendola And Back: Journey of a B-17 Pilot

As a response to the bombing of Pearl Harbor, Alabama native William S. (“Bill”) Tune enlisted in the Army Air Force to serve his country. After being trained as a pilot, Tune departed for Europe, where he flew forty-eight missions in a B-17G Flying Fortress before being captured as a POW and interred in Germany. Tune’s story, like that of so many other Americans, reflects the hardships and opportunities of wartime service.

Buy This Feature
Additional Information
For more information on Bill Tune and his final mission, as well as on the Allies' Combined Bomber Offensive in general, see Mighty by Sacrifice: The Destruction of an American Bomber Squadron, August 29, 1944 (Tuscaloosa: University of Alabama Press, 2009). A number of other recent books chronicle the bomber war against Nazi Germany, notably Donald Millers' Masters of the Air and John Nichols' Tail-End Charlies: The Last Battles of the Bomber War, 1944-1945. The specific operations of the Fifteenth Air Force has long been overlooked in the popular historical memory of the Second World War. Stephen Ambrose's The Wild Blue, which recounted the experiences of George McGovern flying a B-24 Liberator with the Fifteenth during World War II, helped to remedy that oversight. In addition, Jack Myers’s Shot At and Missed provides a valuable first-person narrative from a bombardier-navigator who flew with the Fifteenth.

The following articles in the Encyclopedia of Alabama will also be of interest:
About the Author
Jim Noles is a partner with the Birmingham law firm of Balch & Bingham LLP, where his practice focuses on environmental law and legal issues associated with historic and cultural properties. He is a graduate of the United States Military Academy at West Point and the University of Texas School of Law. In addition to authoring such books as A Pocketful of History: Four Hundred Years of America—One State Quarter at a Time (Boston: Da Capo Press, 2008), he is a frequent contributor to Alabama Heritage. This issue’s article was based on research completed for his most recent book, Mighty by Sacrifice: The Destruction of an American Bomber Squadron—August 29, 1944, which was co-authored by his father, James L. Noles of Florence, Alabama, and published in 2009 by the University of Alabama Press. He wishes to thank the late Bill Tune and other veterans and their families from the 20th Squadron for their kind assistance in that endeavor. ​
Back to Top 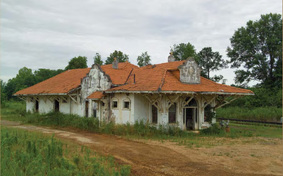 The rich history represented in the beautiful, yet crumbling, remains of many historic buildings in Alabama is in perpetual danger of being demolished and erased from memory. In this latest addition of “Places in Peril,” The Alabama Historic Commission, the Alabama Trust for Historic Preservation and Alabama Heritage have collaborated to highlight homes, business structures, forts, churches, and schoolhouses that stand at risk from neglect, underfunding, or development. From sites that provide an understanding of Alabama’s transportation history to residential and entertainment structures, these endangered properties tell the Alabama story. With much-needed preservation, these structures will survive to educate, inform, and inspire future generations.

This year's Places in Peril include ten properties dating from the late 1840s to the late 1940s, as well as two nationally significant landmarks that had previously been listed but are still very much endangered: Barton Academy in Mobile (Places in Peril 2003) and the old Tallassee Mills complex in Tallassee (Places in Peril 1994; 2001). Continuing to keep the public aware of their significance and continued threatened state may ultimately help to save them.

About the Author
Melanie Betz Gregory joined the staff of the Alabama Historical Commission in the fall of 1989. A native of Illinois, she holds a BA in art history from Western Illinois University and an MA in architectural history and historic preservation from the University of Virginia. Gregory is currently working with the Endangered Properties Program. 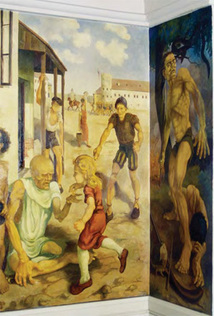 Tucked away in Anniston, the former Officer’s Club of Fort McClellan holds a little-known gem from Alabama’s World War II history. Painted in 1945 by POWs Albert Sagadin and Herbert Belau, the Anniston murals offer a glimpse into life during the war era. Although the murals have been inaccessible to the public for some time now, as the building containing them passed into private ownership, recent events offer hope that these artworks will be preserved and made available for public viewing again, thereby opening up an important relic from Alabama’s wartime past.

About the Author
Joan McKinney was the Director of Protocol and Community Outreach Coordinator at Fort McClellan for twelve years and has an extensive collection of records of the POWs at Fort McClellan. Comments and questions may be directed to Joan via email.

Robert Gamble, senior architectural historian for the Alabama Historical Commission, serves as the standing editor of the “Southern Architecture and Preservation” department of Alabama Heritage. 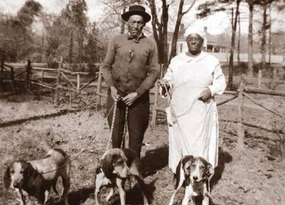 Alabamian Virginia Van der Veer Hamilton reminisces about her possum hunting adventures as a girl in Depression-era Birmingham. Hamilton’s anecdote transports readers back to a time when several future meals could be “bagged” on a good night if you had talented dogs, a bull’s horn, and patience.

About the Author
Virginia Van der Veer Hamilton is a professor emerita of the UAB history department and the author of numerous books and articles. “Possum Hunting” is adapted from her new memoir, Teddy’s Child: Growing Up in the Anxious Southern Gentry Between the Great Wars. Reprinted with permission from NewSouth Books, Montgomery, AL. For more information, see their website. 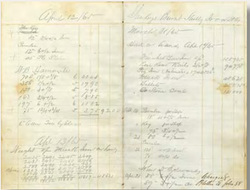 Thanks to a grant from the National Historical Publications and Records Commission, several Alabama institutions have been able to preserve and collect important records from Alabama’s African American communities. Tuskegee University and the University of Alabama have combined resources in this project, called “Bringing Alabama’s African American History to Light: A Model Partnership.” Featuring a variety of documents and records, from personal, business, and research documents, the collection will prove a valuable tool for researchers interested in this important aspect of Alabama’s history.

About the Author
Clark E. Center Jr. is university archivist and curator of Southern History and Life Collections at the W. S. Hoole Special Collections Library at the University of Alabama.

Back to Top
Reading the Southern Past
A World A-Changing

This month, Stephen Goldfarb reviews several books that investigate periods of significant change in Alabama’s past. John M. Coski’s The Confederate Battle Flag: America’s Most Embattled Emblem (Harvard University Press, 2005) traces the history of this battle symbol and its various iterations. Daniel Walker Howe’s What Hath God Wrought: The Transformation of America, 1815–1848 (Oxford University Press, 2007) offers a narrative history of Jacksonian America in the 1820s and the impact Jackson’s politics and policies had on the young nation. Finally, Robert H. Woodrum’s “Everybody Was Black Down There”: Race and Industrial Change in the Alabama Coalfields (University of Georgia Press, 2007) considers the connections between the coal industry and the emerging civil rights struggles of the mid-twentieth century.